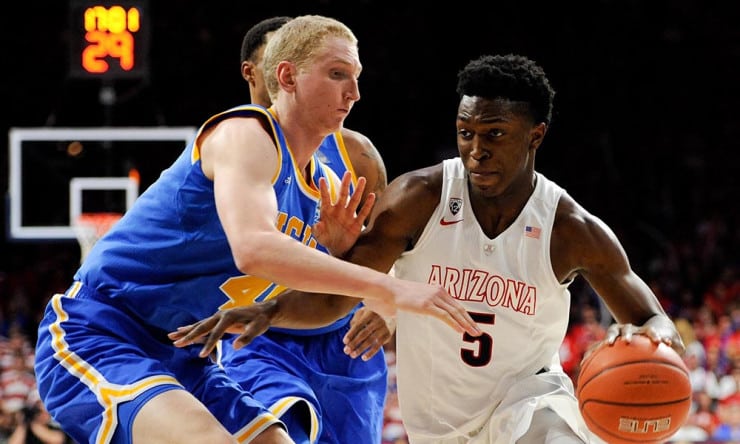 The Wildcats, fresh off a dominant run through the Pac-12, looked like they were going to be tested for the first time in weeks against Ohio State. The Buckeyes were within one at half time, but that turned out to be all the reality check the Wildcats needed to take it up a couple of notches and eventually eliminate Ohio State 73-58. Rondae Hollis-Jefferson and Stanley Johnson shot a combined 4-24 from the field, but did impact the game in other ways with their rebounding, defense and playmaking skills. With them struggling to score, though, T.J. McConnell and Gabe York picked up the slack. They tied each other for game-high scoring honors with 19, while the Wildcats dominated the boards overall to the tune of 43-26. We knew going into the game the only way OSU was going to stand a chance was if D’Angelo Russell was at his absolute best. He was solid, finishing with nine points, seven rebounds and six assists – a near triple-double, but he shot just 3-19 from the floor and his team could not help overcome that. Sam Thompson did his best with 18 points, but it just wasn’t enough for the Buckeyes to stay alive. The Wildcats will take on the Xavier Muskateers in the Sweet 16. As long as Johnson and Hollis-Jefferson can get back on track offensively, look for the Wildcats to be a very tough out. Xavier has gotten to the Sweet 16 by defeating an 11 seed and a 14 seed. Arizona serves as a major increase in competition.

Chris Mack continues to prove how well-rounded his coaching style is. After winning their last game against Georgia State, 75-67, the Musketeers advance to the Sweet Sixteen to face Arizona. Mack was able to get great performances out of Jaylen Reynolds and Myles Davis. They combined for 38 points after scoring only nine points combined in their first round game with Ole Miss. Davis did his damage outside on 5-8 shooting from the three-point line while Reynolds benefited from Georgia State’s focus on Matt Stainbrook going 8-9 in the paint. Xavier struggled to get Stainbrook touches and he was double teamed throughout the early part of the game. The adjustment was made to move Stainbrook out to the perimeter, opening up Reynolds mismatches. At times Mack went with an unusual lineup of four guards to attack the 1-3-1 that Ron Hunter used to change the tempo. Trevon Bluiett, the season’s second leading scorer, was held to only three shot attempts but hit a crucial three in the second half. Xavier continues to show the ability to win in different ways and will be an interesting opponent for Arizona. Their own 1-3-1 may limit the Wildcats’ slashing pro prospects. Bluiett and Stainbrook must regroup to combine with the scoring of Reynolds and Davis if they want to put enough points on the board to have a chance to win. If Gabe York or T.J. McConnell score as they did last round, Chris Mack will be learning a stern lesson from his coaching mentor Sean Miller. ​