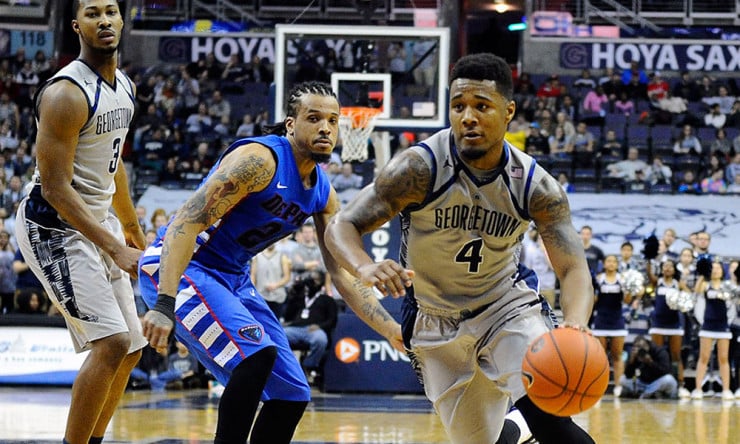 After failing to make the NCAA Tournament last year, the Hoyas are dancing again for the 30th time in school history. Their bounce-back season has been led by D’Vauntas Smith-Rivera, one of the most productive point guards in the country. Smith-Rivera has followed up a stellar sophomore campaign by putting up 16.3 points, 4.2 rebounds and 3.2 assists per game this year. Joshua Smith, a 6’11, 350-lbs. center who has shown NBA potential throughout his career, has put forth a strong senior season, as he is second on the team in points per game (11.1) and first in rebounding (6.1). He provides the Hoyas with the physical presence they’ll need to match up with some of the bigger teams in the tournament. The Hoyas have long been known for executing the Princeton offense as well as any other program, but this year’s team may actually be more lethal when they’re pushing the tempo and attacking in transition. They averaged 71 points a game this season against the fifth most difficult schedule in college basketball. They did go just 1-5 against the RPI top 25, but outside of a lopsided 69-53 loss at Villanova, all of those games were decided by two possessions or less. The fact that 17 of their wins come against teams outside of the RPI top 50 will lead to hesitation in penciling in the Hoyas for a deep tournament run, but they’re athletic and versatile. Where the Hoyas will struggle is against a team that can control the tempo against them and force them to play more in the halfcourt, where their lack of serious three-point shooting threats outside of Smith-Rivera can be problematic.

The tournament hasn’t even started and Tyler Harvey is already getting the notoriety of tournament heroes of past (think C.J. McCollum, Lehigh). His story is remarkable, recruited walk on to nations leading scorer (22.9 PPG) it certainly is the stuff fairy tales are made of. The question is whether the slipper fits and Eastern Washington (26-8, 14-4) is hoping their Big Sky championship is just the beginning. One thing is for sure, there will be no shortage of offense when the Eagles take the court (for both teams). EWU runs and guns to the tune of 80.8 PPG, good for 3rd best in the country. Add in an offensive efficiency of 1.026 PPP (6th in the country), which places them in the 99th percentile, and you have got some serious firepower. Conversely the Eagles concede 73.6 PPG (328th), practically giving their opponent the red carpet treatment right to the front of the rim. And as efficient as they are on offense, they are just as bad on defense to the tune of 0.933 PPP which places them 322nd in the nation. If they are to out score their opponent it will begin and end with the aforementioned Harvey (22.9 PPG, 3.7 RPG, 2.6 APG), who can absolutely catch fire from deep having knocked down a Stephen Curry like 122 three-pointers on the year. Toss in the coming of age of versatile big man Bogdon Bliznyuk (8.6 PPG, four RPG, 1.1 APG) and we may very well be looking at the next Lehigh, but I certainly wouldn’t bet the house.