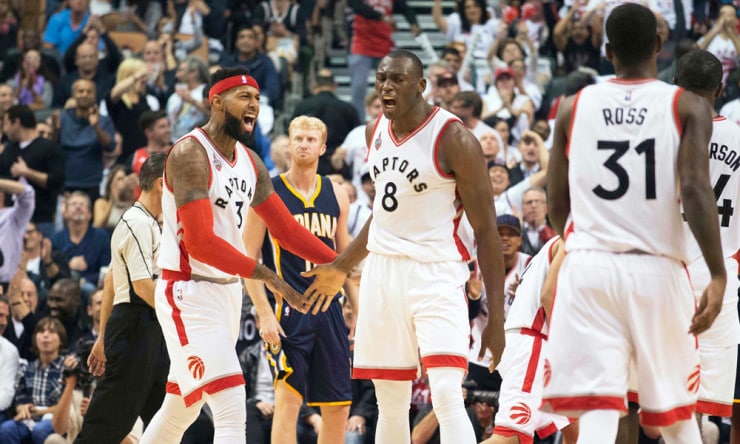 After winning Game 1, there definitely was a sense that the Toronto Raptors, losers of their first-round series for two seasons in a row, could be in trouble once again. But they’ve responded over the course of the last two games to take a 2-1 lead, regaining home court advantage in the process.

The biggest change in Game 3 was that DeMar DeRozan and Kyle Lowry both came alive offensively in the same game for the first time this series. While neither player shot particular well (Lowry was 8-for-21 and DeRozan was 7-for-19), they each scored a team-high 21 points. Lowry knocked down four three-pointers and dished out eight dimes, and DeRozan went to the line nine times. They haven’t been efficient all series, but at least in Game 3 they figured out how to be effective anyway.

It made a difference for the Raptors, who really need them to be great to win the series, especially with Paul George dominating the way he has through three games. This time, George dropped 25 points, hauled in 10 boards and added six assists, which puts him at 28.7 PPG, 6 RPG, 4.3 APG and 2 SPG for the series. George has been great, but the rest of his team has been too up-and-down, just as they have been for the bulk of the season.

The Pacers also have been getting off to slow starts, finishing the first quarters of the first three games down by five, 11 and seven points. They’ve got to stop digging themselves out of holes if they want to have a real shot at stealing this series, but time is running out to have any real shot of doing that.

Game 4 will be Saturday in Indiana, and it’s absolutely a must-win for the Pacers. It may end up being the last game they play at home this year if things don’t turn around, but they’ve held Toronto’s top two players to atrocious shooting percentages and George is rolling. That formula is going to get Indy some wins, but whether or not it can get them three wins in the next four contests is a pretty serious question.