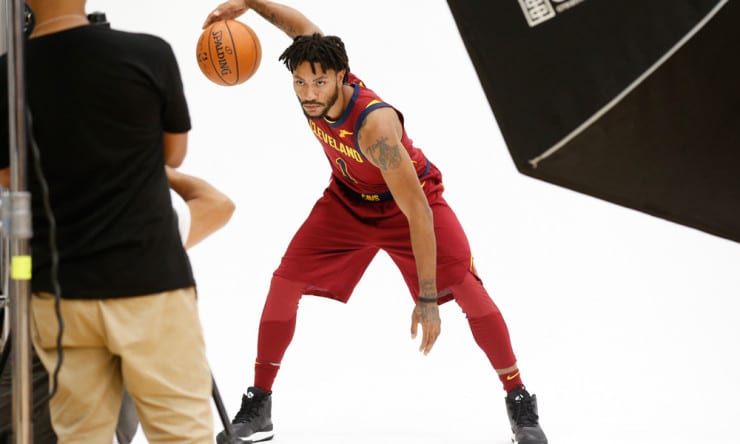 The Cleveland Cavaliers received great news this morning regarding the condition of Isaiah Thomas. The diagnosis of the All-Star point guard’s hip after weeks of monitoring found he could be back in the fold as soon as January.

Until then, however, there will be somebody else holding down the fort until that day comes. Luckily for the Cavaliers, that man has enlivened LeBron James and the team itself looking ahead to the upcoming season.

“I’m excited more than anybody about Derrick [Rose],” James said of the former MVP, who spent last year with the New York Knicks. The kid has a lot to prove.

“I know from competing against him for so many years, especially in Miami when he was with Chicago, knowing the competitor that he has been over the years. Been a fan of him for a long time. I never thought in my wildest dreams that I’d be a teammate of his.”

The endorsement from “The King” himself has instilled more confidence into Rose, who already has plenty of self-belief.

“It’s an honor,” Rose said. “I’m blessed to be in this situation, very fortunate that they even considered taking me. With this opportunity, I’mma take it and run with it. I think I’ve been preparing myself for this opportunity for a long time.”

Stepping into starting role for a team that has reached the past three NBA Finals and has championship DNA from whatever was going on at Madison Square Garden is a heck of a transition. To Rose, there are a lot of misconceptions about him.

On the floor, he really wasn’t put in a position to succeed by being a part of such a tumultuous organization. And even despite that, he still made the best of the situation he was in. James saw that and knows what he’s capable of.

“I think he had a hell of a season last year and people don’t really see because of the chaos that was going on in New York,” LeBron said. “Played 64 games, averaged 18 points, four and four. I’m excited to have him here because I want people to know that D Rose can still play at a high level.”

Rose believes his ability to distribute and find the open man is much better than what’s perceived by some in the basketball world. He’s more than ready to display those skills when the season kicks off.

“That gets overlooked,” he said. “I don’t know why, but I think I’m a great passer and my IQ of the game is high. It’s a lot of things that happened last year that overshadowed my play.”

When Rose was asked about how people view him from the outside, he isn’t surprised about the negative outlook. But, like many other new Cavaliers, he’s plenty motivated to prove himself.

“That’s every year,” he said. “It’s not my job to really get into it. I take bits and pieces of material that I think fuel me into the offseason that I’ll work on, but my job is not to listen to what everybody says. I’m the player. I know how good I am.

“I’m 28. People act like I’m 38 years old. My job is not to brag or boast about it. It’s to let them see me on the court and they judge and make their opinions after that.”

Those detractors may have to change their minds on Rose considering the talent surrounding him. Not since the early 2010’s has he even come close to having a supporting cast like the one in Cleveland.

It’ll be the healthiest locker room he’s been a part of since his career started, as well as one of the deepest and most talented rosters in the entire league. Riding alongside somebody like LeBron can do a little good, too.

“It’s very exciting,” he said. “It’s one of the reasons why I chose to come here. For one, I’ll be happy playing basketball again. I’m back in a winning environment. The franchise and everybody that’s here has one common goal and that’s to win a championship.”

“That’s something I’ve been wanting my entire career, the opportunity to play for a championship, so I have a huge opportunity in front of me and I’m not shying away from it.”

If you don’t believe Rose, you’ve already heard LeBron rave over him. In his introductory press conference, Thomas had nothing but good things to say. So what about Kevin Love’s thoughts?

“He looks great,” Love said. “Seeing everybody and talking to everybody, figuring out where their minds were at in Santa Barbara—He’s hungry.

“He’s continued to be vocal about wanting to win, and I think he’s going to speak that into existence. He’s very, very heady. He knows what he’s capable of when he’s healthy, and he’s healthy now.”

Rose’s relationship with Love goes back to high school, where the two faced off on a number of occasions. There’s a bond between their families and they’ve been close for a while.

“He’s a competitor,” Rose said of the All-Star power forward. “That’s something I can always respect and always get respect from him. Whenever we’ve seen each other, it’s been nothing but love. We played on one world championship team, Team USA.

“His IQ of the game is high. The way he outlets the ball with me being on the break, that’s what guards dream for, a big like him.”

Staying on the subject of how Rose will fit into the Cavaliers’ scheme—it’s going to be as a facilitator. He’s a player that thrives in the paint by attacking the basket. In turn, it should force the defense’s hand and allow for those on the perimeter to capitalize.

Head coach Tyronn Lue is looking forward to seeing Rose being himself again, which will make Cleveland a force to be reckoned with once everything clicks.

“He’s 28 years old,” Lue said. “I know he’s been around for a long time and he’s achieved a lot of things in his short career being so young, but we really value what he can bring to this team.

“Coming to our team in the spacing that we have and the shooters that we have, I think it’ll be great for him. Give him a new start. He’s ready to go and he’s very excited.”

Itching to get on the court, Rose understands the challenge ahead of him with his new team. But sometimes that’s exactly what somebody needs to take their game to the next level.

“Every year, I kind of put pressure on myself to perform that way,” Rose said. “I feel like myself, as an athlete, if you go out there with no pressure you play lackadaisical and that’s not me.

“I want to be very precise with everything I’m doing on the floor and I want to produce. Coming to a team like this, of course, it’s going to be kind of easy to go out there and play my game. But my job is to go out there, push guys and just vice-versa. I want them to push me.”

When it’s all said and done, Rose made the choice to join Cleveland to start fresh. It’s something that’s lifted a weight off his shoulders and should allow him to perform to the best of his abilities in front of a much wider audience.