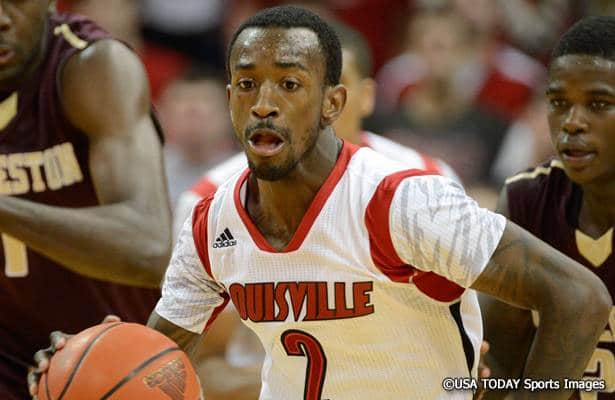 CINCINNATI — Louisville guard Russ Smith wasn’t much of a factor offensively on Saturday while being saddled with foul trouble for much of the game.

But, the senior came through when the Cardinals needed him most.

Smith’s jumper with three seconds remaining on an assist from freshman guard Terry Rozier lifted No. 11 Louisville to a 58-57 victory over the No. 7 Bearcats before a sold-out crowd of 13,176 at Fifth Third Arena.

“I wanted the ball in the last two minutes,” Smith said. “I was just trying to make good decisions down the stretch. Terry (Rozier) is an unselfish player. He recognized where I was on the court.”

Forward Montrezl Harrell led the Cardinals with 21 points and 10 rebounds and Rozier added 11 points for Louisville (23-4, 12-2 in the American Athletic Conference), which extended its winning streak to six games.

Smith finished with 10 points, including the game-winner.

“I thought it was a great shot,” Cardinals coach Rick Pitino said. “I think Terry could have taken the shot, but he passed it to Russ. Like Connecticut and Memphis, this was a difficult crowd to battle with, but we kept going and we pulled out the win.”

Senior guard Sean Kilpatrick did just about everything to rally Cincinnati (24-4, 13-2) on a historic night in which he eclipsed 2,000 career points and scored 22 of his 28 points in the second half.

“That was a heck of a game, better described as a bloodbath,” Cincinnati coach Mick Cronin said. “It wasn’t our toughest loss. The toughest losses are in the NCAA Tournament, because that ends your season.”

The Cardinals trailed by one, but Harrell scored on an assist from Smith to put Louisville ahead, 56-55, with 26.3 seconds left.

“We had a three-point lead and gave up two layups,” Cronin said. “That was our watershed moment.”

The Bearcats were scoreless until Kilpatrick’s 3-pointer with 16:52 left in the first half. And, Louisville did not have a field goal until forward Stephan Van Treese’s layup at the 15:28 mark.

“I thought the better defensive team would win the game tonight,” Pitino said.

With under six minutes remaining in the first half, Cincinnati was 3-for-23 from the field.

A layup by freshman forward Mangok Mathiang capped a 13-0 Louisville run to make the score 21-9.

Junior forward Jermaine Sanders sparked a 7-0 run by the Bearcats with a 3-pointer to pull them to within five points late in the first half.

Cincinnati, which shot only 19.4 percent in the first half, was fortunate to trail by only three points at halftime.

“A minor miracle,” Cronin said. “I love our guys for how hard they play. We just didn’t play well today. SK’s points and (Titus) Rubles’ rebounding were the reason we were in the game.”

Rubles, a senior forward, finished with 14 rebounds for Cincinnati, which outrebounded Louisville, 44-36, including 18 offensive boards.

Much of Louisville’s run occurred with Smith on the bench with three fouls. Senior guard Luke Hancock and Mathiang both fouled out.

“I told them (at halftime), you have got to win this game on defense, and we did,” Pitino said.

Cincinnati rallied in the second half behind Kilpatrick, who hit three straight free throws to put the Bearcats ahead, 53-51, with 1:40 left.

Saturday’s game was played physically throughout, but the officials were liberal with the whistles. Case in point: Bearcats guard Shaq Thomas was struck on the wrist and briefly left the game in the first half, but no foul was called.

“I have no comment on officiating,” Cronin said. “Saying that, I don’t mean that officiating cost us the game.