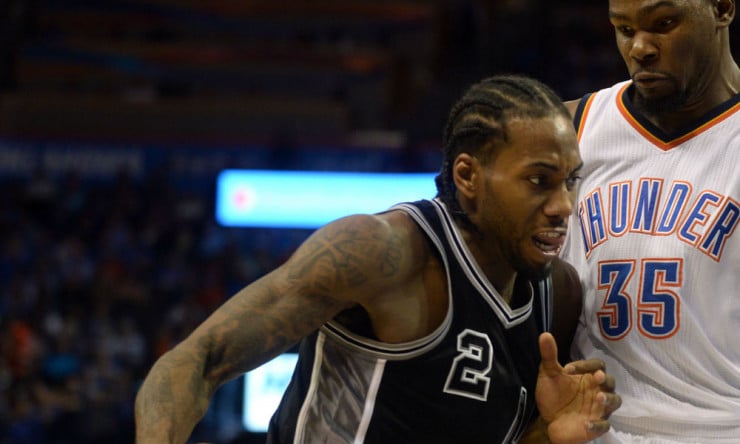 The road team has now won consecutive games in this series as the San Antonio Spurs have taken a 2-1 lead in their Western Conference Semifinals match-up with the Oklahoma City Thunder.

On Friday, Kawhi Leonard and the Spurs found a way to match the energy the home team brought in the early going and took a 27-20 lead into the second quarter. After scoring just 11 points throughout all of Game 2, Leonard was aggressive from the start as the former Finals MVP (2013) got the Spurs going with 11 points and three rebounds over the first 12 minutes of action. Kevin Durant, Russell Westbrook and Serge Ibaka each scored six points in the quarter to pace the Thunder attack.

Patty Mills and David West each knocked down three-pointers early in the second and the Spurs worked themselves into control over the game, causing the Thunder to call timeout in order to regroup (down 35-22) just four minutes into the quarter. Enes Kanter has never been accused of being a defensive stopper (to put it nicely), but the normally offensive-minded reserve big man has also found a way to at least make an impact on the defensive end several times thus far in the series. Beyond remaining active in and around the paint, Kanter has repeatedly gotten his hands on loose balls and even registered a three-block game in Oklahoma City’s Game 2 road victory.

Coach Billy Donovan elected to go with Durant on Leonard for a brief stretch in the second quarter, and the added length appeared to impact his level of aggression. Danny Green and Serge Ibaka have certainly found their grooves for their respective teams from beyond the arc, as the two of them traded threes about midway through the second quarter. Green has already made 10 three-pointers through three games for San Antonio while Ibaka has knocked down 10 of his own for OKC.

It was a five-point game (43-38 Spurs) when Durant (three fouls) went to the bench with 1:52 left in the half, but San Antonio wasn’t able to capitalize as the Thunder continued fighting and stayed within reach (47-42 Spurs) heading into the half.

Green continued his impressive play for San Antonio in the second half as he not only continued to knock down threes (2-5 in Game 3), he also made plays on the defensive end both in transition and in the halfcourt set. The two teams exchanged runs over the last 18 minutes of action with LaMarcus Aldridge, Leonard and Tony Parker (19 points, five assists, eight rebounds) doing the bulk of the work for San Antonio.

Westbrook (31 points, nine rebounds, eight assists) and Durant (26 points, five rebounds, three assists), carried the heaviest workloads for Oklahoma City as they customarily do, but the Thunder fell just a little short on their home court.

In the end, as will be the case when you have two relatively evenly-matched opponents, the team that executed the best down the stretch was once again triumphant. David West made a big shot in traffic. Parker made two free throws following a huge offensive rebound by Leonard (31 points, 11 rebounds) with under 20 seconds left. Leonard then sealed the deal with two clutch free throws of his own as the Spurs won Game 3 by a score of 100-96.

Game 4 might not technically be a “must win” for the Thunder, but you don’t want to head back to San Antonio down 3-1. The Thunder were one of only two teams to beat the Spurs in San Antonio this season, but they certainly don’t want to have to do it with the Spurs so close to the Conference Finals.

Prediction: Oklahoma City returns with a spirited effort and evens the series back up at 2-2 with a win in Game 4.