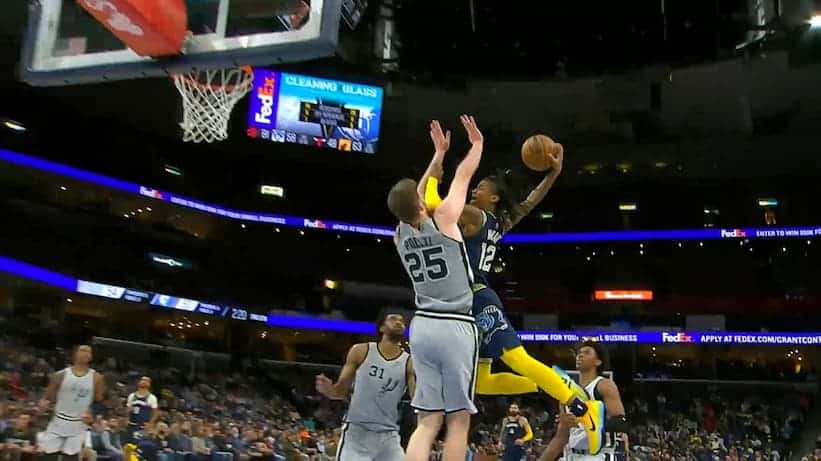 We’re not quite sure why, but some players across the league were feeling extra bouncy last night. That resulted is a few more monstrous dunks than we’re used to seeing in one night. Players like Ja Morant and Trey Murphy III gave us some of the best in-game dunks the league has seen in the 2022-23 season. Next, we’ll take a look at the top 5 dunks from Wednesday night’s games.

Just a heads up, Trey Murphy III will be appearing on this list again as he had himself one heck of a game yesterday. He’s a young player who’s still finding his way in the league and he’s got some elite skills. Murphy III can shot it from deep, but last night he made his presence felt with some highlight dunks. He was in perfect position in the second quarter to grab a teammates missed three and then threw down a monster two-handed put-back on Boston’s Luke Kornet.

Look at the Pelican FLY!!! pic.twitter.com/yfKFfoS5lr

Alperen Sengun is a young and rising star in this league. He hasn’t been getting the recognition he deserves as his team holds the worst record in the NBA. The second-year pro has taken a nice leap in his sophomore season and is playing a nice role for the Rockets. In the 2022-23 season he is averaging 15/9/3. Mid-way through the first quarter of the Rockets vs Kings game last night, Sengun was in perfect position for a viscous two-handed put-back slam over De’Aaron Fox and Harrison Barnes.

SENGUN ON THE PUTBACK 😳💪

The young Houston Rocket’s players were ready to put on a show with some highlight dunks as rookie Jabari Smith Jr. wanted to join in on the fun. With four minutes and change left in the third quarter of the Rocket vs Kings, Smith Jr. was in transition with his teammate Jea’Sean Tate and got a beautiful pass to set up his monster dunk. He took the bounce pass in stride and proceeded to throw a one-handed slam slam over King’s rookie Keegan Murray.

THROW IT DOWN JABARI SMITH JR. 😱

We said that Murphy III would be back and this dunk topped his put-back slam that ranked at five on our list. The Pelicans ended up losing by 11, but Murphy’s breakaway dunk in the third quarter were crucial points at the time and he got them in style. Boston threw in a pass off a dead ball and Murphy III stole the ball instantly and had nobody back to stop him. He drove to the basket, leaped up and threw down a sick two-handed windmill dunk. It looked like something the legendary Vince Carter would have done in a game. His dunk quickly quieted the Boston crowd.

TAKE IT ALL THE WAY TREY!

With the game still in reach for the Spurs late in the fourth, all-star PG for the Grizzlies Ja Morant drove to the basket. He had Spur’s big man Jakob Poeltl on him, but that would not phase Morant one bit. He took the contact and got up high to throw down a one-handed tomahawk slam over Poeltl and it ended any momentum that San Antonio had at that point. That would be the Grizzlies eighth win in a row last night as they still are tied with the Denver Nuggets at 28-13 for the top seed in the Western Conference.