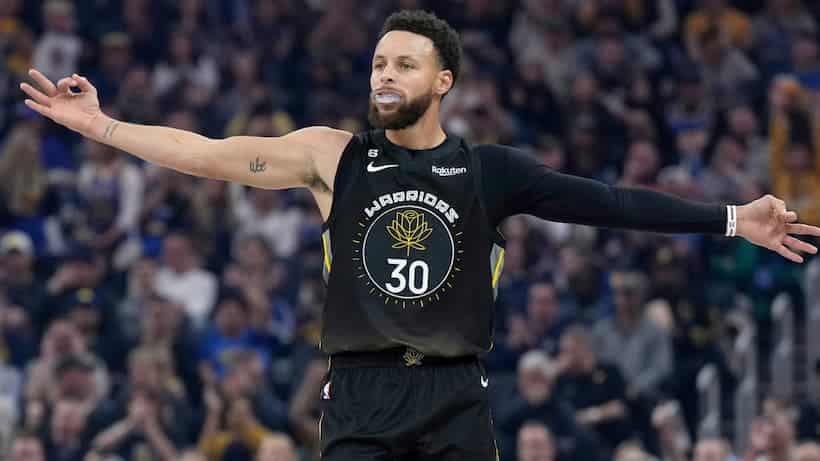 We had a smaller five-game NBA slate last night, but we still had some thrilling matchups and incredible highlight’s throughout. Brooklyn lost their fourth straight game since Kevin Durant has been out with an MCL injury. The Bulls took care of business yesterday when the faced the Pistons overseas in Paris. Finally, we had an NBA Finals rematch between the Warriors and Celtics with Boston taking the OT victory. Next, we’ll look at the top 5 plays from Thursday night’s games.

The Philadelphia 76ers took care of business on the road last night with a 105-95 win backed by Joel Embiid’s 32 points and 9 rebounds. He also had three blocks in the game, but his best came in the first quarter. Portland’s Nassir Little grabbed a miss of his teammate’s shot and almost instantly went up to try and get the second-chance points. Little did not see the Sixers big man flying from behind and Embiid swatted away his shot attempt with ease.

off to a strong start. 💪

4. Scottie Barnes goes uncontested to the rack for the one-handed slam

Last season’s ROY Scottie Barns finished the game last night with a season-high 29 points, but the Raptors fell short by two points in a 128-126 loss to the Timberwolves. With a nine-point lead with just over ten minutes to go in the fourth quarter, Barnes froze the defense and then flew through the lane and threw down the one-handed jam. His size and speed made the dunk nearly uncontested.

In case y'all missed it, we got you ⤵️ https://t.co/Kvl5Dyk93o pic.twitter.com/IyZoOGZEfm

Derrick Jones Jr. came to Paris with a purpose this week for Chicago. He wanted to put on a show with his dunks last night and successfully did that and then some. In the first quarter, veteran PG Goran Dragic took a nice screen from Jones Jr. and the Slovenian drove to the basket. With the defense out of position, Dragic lobbed a pass where only Jones Jr. could catch it and he made a circus-like cactch in the air while also getting bumped by the defense. It literally looked like he was soaring through the air. Jones Jr. has some of the best hop’s in the games right now.

2. Al Horford stays with Jordan Poole in the fast break to stuff his shot attempt

The Warriors stole the ball from the Celtics mid-way through the first quarter. Klay Thompson hit his teammate Jordan Poole in stride with the beautiful chest pass. Poole used his speed to fly to the basket, but he did not see the 36 year old Al Horford from the Celtics trailing behind him. Horford jumped at the perfect time and stuffed Poole’s shot attempt and secured the rebound off the block.

GO GET THAT, OG ❌ pic.twitter.com/g6dmczir3I

There is not shot on the court that Steph Curry is not capable of making. In the final seconds of the first half, the Warriors had the ball stolen from them and Jayson Tatum was getting as close as he could for the final shot. Curry stripped Tatum of the ball as he was driving past him and Curry took one dribble, set his feet, and you can guess what happened next. His half-court buzzer beater gave the Warriors a 55-54 leading going into the break.

Reminder: Stephen Curry is an #NBAAllStar