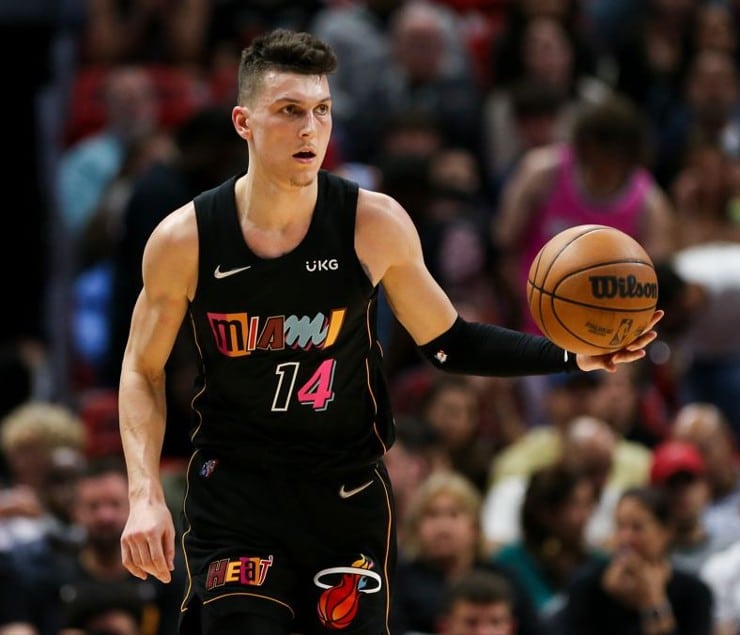 On Thursday, Miami Heat guard Tyler Herro joined Stephen Curry and James Harden as only the third player in NBA history to hit at least nine 3-pointers in consecutive games.

Per multiple NBA betting sites, the Heat have the 14th-best odds to win the championship in 2023. Check out which sportsbooks are showing greater odds for the Brooklyn Nets and the Cleveland Cavaliers.

Per Heat: Tyler Herro became just the third player in NBA history to hit at least nine three-pointers in consecutive games (joining only Stephen Curry and James Harden) and the first ever to do it on a back-to-back.

“I didn’t know it was the record until last night when I hit nine, and they said I was one short,” Tyler Herro said after the win. “I didn’t have any intention of coming in to tie the record, but I was just trying to get threes up. I think shooting more threes is helping.”

Furthermore, Herro is the youngest player in NBA history to accomplish this feat. The Kentucky product turns 23 on Jan. 20. Curry was 27 at the time he knocked down at least nine 3-pointers in back-to-back games. Harden was also 30.

Herro is the first Heat player since LeBron James to score 35-plus points in consecutive contests. The fourth-year guard recorded 35 points and nine 3-pointers against the Oklahoma City Thunder on Wednesday.

James logged 37 points versus the Memphis Grizzlies on April 9, 2014, and the four-time MVP scored 36 points against the Indiana Pacers two days later. But not even LeBron has ever knocked down a total of 19 threes over the course of two games.

“The last couple of games, that’s been really the scheme against him,” Heat coach Erik Spoelstra said. “That’s been open. But regardless, he’s too good of a shooter for us to not take threes off the catch. He has to continue to be assertive in those opportunities. He’s just a brilliant shooter. He can do it off the dribble and off the catch.”