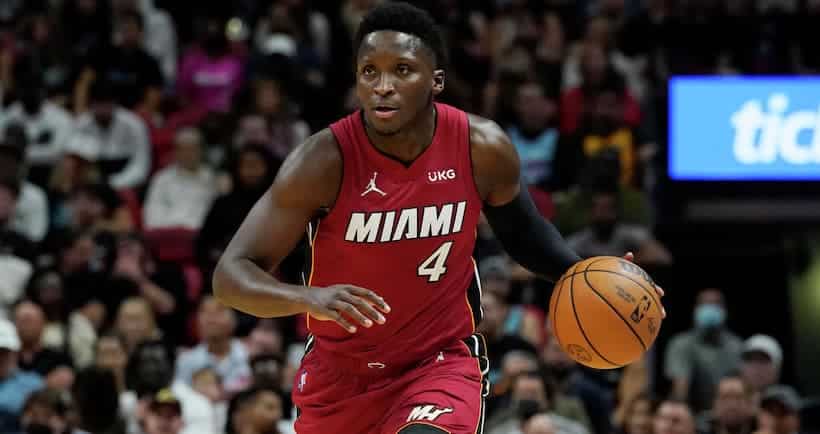 The Miami Heat have had some much needed success to climb back up the rankings in the Eastern Conference. Head coach Erik Spoelstra has the Heat at 19-18 so far this season which is seventh in the East. They’ve gone 7-3 in their last ten games and most recently beat the Jazz on the road, 126-123. All-star SG Victor Oladipo has been dealing with injuries for a large part of his career, but has been impressive in his return for the Heat so far.

Oladipo has played in only 11 of the Heat’s 37 games this season. Both he and the team know that they do not need to rush him back. It has taken some time, but the wait is worth it. In their win on Saturday vs the Jazz, Oladipo had 23/5/5 along with three steals in the game.

Florida Sports Betting sites have the Heat at (+4000) to win the Finals this season.

Vic been itching to do this to someone 😂💀

In the clip above, you can see Oladipo throw down a one-handed jam vs rookie center Walker Kessler who happens to be seven-foot one. He had no issues getting up and dunking over him. His teammate Bam Adebayo had this to say about how Oladipo and the team have bought into the process.

“It’s the patience of him buying into a role,”… “Coach was like, `We want you to defend to get you back in your groove.’ Him buying into that, I know it’s not an easy being where he was at a point in time of his life.” – Bam Adebayo

Oladipo had offseason knee surgery and has been dealing with a long list of injuries over the last four seasons. The 30 year old has a good head on his shoulders and won’t let another injury take away what he loves to do most… score the basketball.

Even after a 23 point performance in their win vs the Jazz on Saturday, head coach Erik Spoelstra said that Oladipo still needs to play another 40-50 games before he’s back to fill speed. That’s essentially the rest of the season for the Heat if he plays a majority of those games.