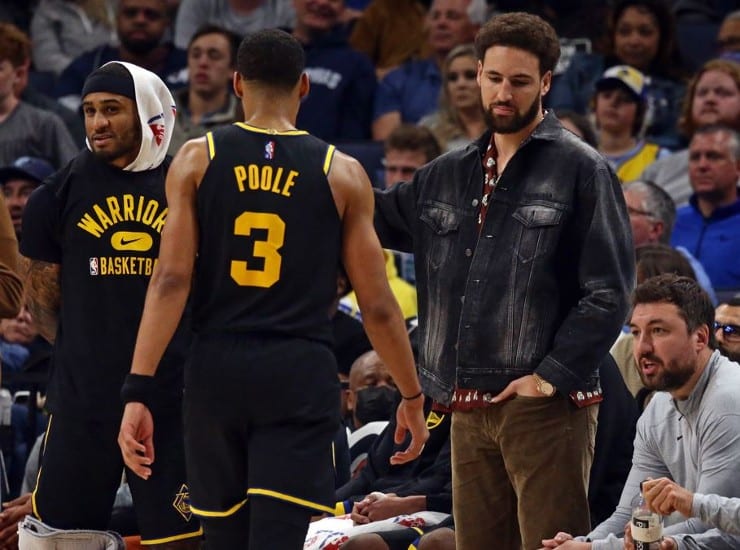 Golden State Warriors coach Steve Kerr understands his team is struggling right now, but one thing not on his mind is starting Jordan Poole over Klay Thompson.

During a radio segment on “95.7 The Game,” Kerr reiterated his strategy. “No, that’s not something I’ve given any thought to,” answered the Warriors coach when asked about starting Poole over Thompson.

Based on a few NBA betting sites, the Warriors have the third-best odds to win the championship in 2023. Some sportsbooks still show them behind the Milwaukee Bucks and Boston Celtics.

Kerr hasn’t thought about ever bringing Klay off the bench pic.twitter.com/RZ1ww4VaMd

“Jordan and Klay are very different players. Jordan’s on the ball, Klay’s off the ball. When Steph is off the floor, we absolutely have to have Jordan on the floor.

Last season, in 76 appearances, Poole made 51 starts for Golden State. While Thompson was still recovering from his ACL injury, Kerr moved the Michigan product into the starting-5 unit.

“It doesn’t mean we can’t change combinations and rotations to get certain guys on the court together, but Klay is a starter,” continued Kerr. “That 5-man unit is the best in the league.

It doesn’t make a lot of sense to me to break up that unit. What we really need to do is tighten up the areas where we’ve been weak in. If we do that, I have a lot of confidence that we’ll get back on the right track.”

Defensively, the Warriors are one of the weakest teams in the league. They’re allowing 120.6 points per game, ranking 29th overall. Their defensive efficiency rating is also 1.120, which ranks 27th as well.

Moving Poole back to the starting lineup would help the Warriors offensively, but it might make them even worse on defense. Though, it’s deceiving because Thompson is in a bit of a slump right now.

So far this season, Poole is proving to be a better offensive and defensive option over Thompson. The fourth-year player is averaging 15.2 points and 1.2 steals off the bench this season.

Success in a sixth man role does not always translate to prosperity as a starter, especially in back-to-back seasons. If Kerr moved Thompson to the bench, would Poole be able to duplicate his numbers from last season? The 23-year-old playing alongside Curry worked wonders for the team during Thompson’s absence.