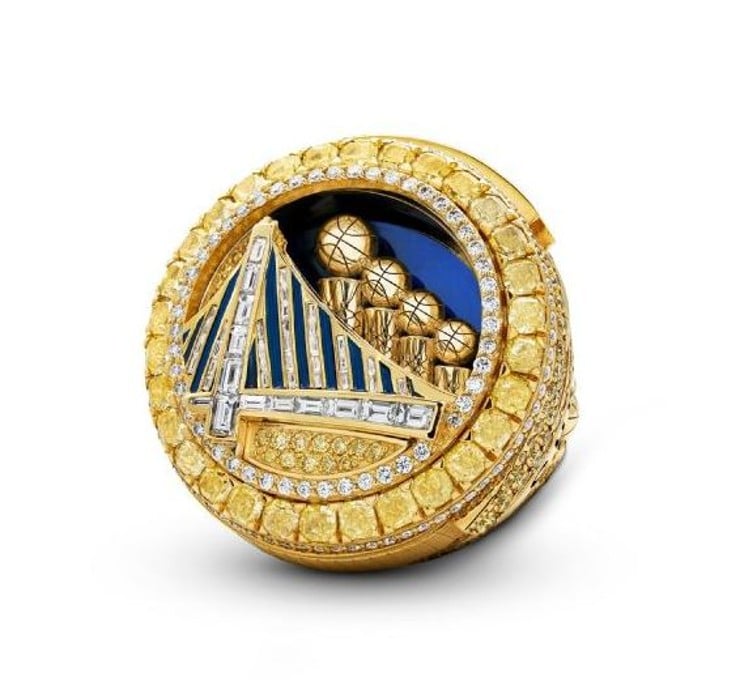 Prior to the 2022-23 season opener against the Lakers, the Warriors unveiled their seventh title banner and championship rings at Chase Center.

In addition to Warriors front office executives and players, the rings were designed by Josh Arasheben, who runs the jewelery business known as Jason of Beverly Hills in Los Angeles, California.

According to some NBA betting sites, the Warriors are favored to repeat in 2023. However, a few sportsbooks are showing higher odds for the Celtics and Clippers.

The rings are 16 carets and contain .91 carats of white diamonds on the inner bezel to honor the Warriors’ 91% home winning percentage in the playoffs.

Furthermore, each ring is made up of seven carats of yellow diamonds. The Bay Bridge is visible on the front of the ring as well. It consists of 43 white diamond baguettes, symbolizing Stephen Curry’s 43-point performance in Game 4 of the 2022 NBA Finals.

While the team colors are yellow and blue, the yellow diamonds also represent the Warriors’ new “Gold Blooded” motto the franchise adopted before their first-round series versus the Nuggets.

Additionally, in an interview with ESPN, Arasheben revealed that he and his team had only five weeks to make the 65 rings. Each ring required between 40 to 50 hours to craft.

“The journey matters,” said Warriors assistant G.M. Kirk Lacob to the sports network. “That is the story you are trying to tell with any ring. The ring itself is cool, it’s flashy.”

“But what it really is, is the physical manifestation of the journey. It’s supposed to remind you of everything you went through.” After defeating the Celtics in six games of the 2022 NBA Finals, the Warriors won their fourth championship in eight years.

Moreover, in their 2022-23 season opener, the Warriors defeated the Lakers 123-109. Curry finished his performance with 33 points, 6 rebounds, and 7 assists in 33 minutes of action.

Andrew Wiggins ended his outing with 20 points, 6 boards, and 4 assists in 29 minutes played. To start the second half, Golden State outscored them 32-19.