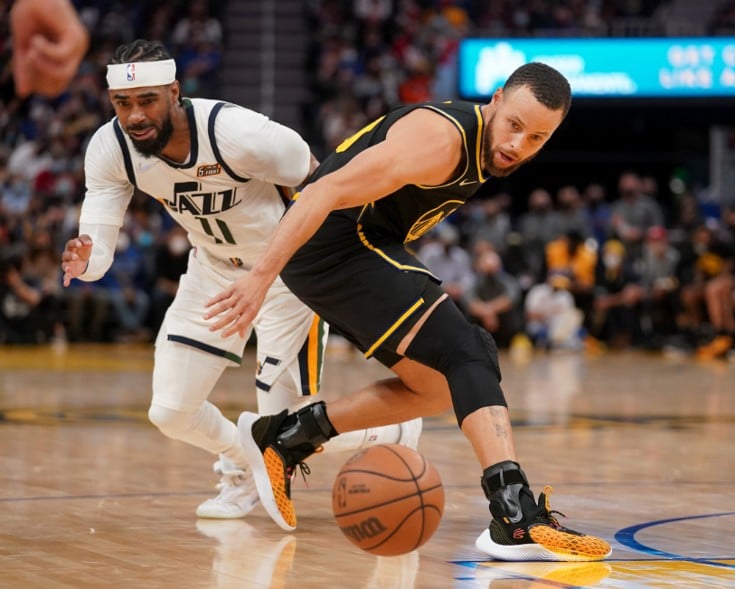 In tonight’s Western Conference clash, the Golden State Warriors (41-13, 29-21-4 ATS) are playing the Utah Jazz (33-21, 23-30-1 ATS); NBA picks are available here. Will Stephen Curry and the Warriors extend their winning streak to 10 games? In addition to the starting lineups, our top NBA picks and betting trends are featured below.

All Warriors vs Jazz betting odds can be found at BetOnline

Additionally, on Monday, in the Warriors’ 110-98 road win versus the Thunder, guard Klay Thompson led his team in scoring with 21 points earned in 29 minutes of action. Guard Stephen Curry added another double-double to his career total, too. He amassed 18 points, 9.0 rebounds and 10 assists in 37 minutes played. Golden State has won nine of its last 10 games. Counting this victory, the Warriors are now 16-9 away, 25-4 at home and 12-11-2 ATS on the road this season.

On the other side, in the Jazz’s 113-104 home win over the Knicks on Monday, guard Donovan Mitchell scored a team-high 32 points in 36 minutes on the court. Forward Bojan Bogdanovic also contributed 20 points, 4.0 rebounds and 1.0 assist in 32 minutes played. Utah has won only four of its previous 10 contests, but the team is on a three-game winning streak. The Jazz are 18-10 at home, 15-11 away and 10-18 ATS at home.

Per ESPN’s Basketball Power Index, the Jazz have a 57.3% chance of winning.

Factoring in other head-to-head matchups, in the past four meetings, the Warriors are a perfect 4-0 against the Jazz. On Jan. 23, 2022, the second time these teams faced off during this regular season, Golden State won 94-92 at Chase Center. The Jazz have not defeated them since Jan. 23, 2021, when they won 127-108 at Vivint Arena.

In other news, Warriors’ center Kevon Looney is listed as questionable for tonight’s contest. He sustained a left quad contusion during a play against the Thunder on Monday. If Looney sits this one out, this noteworthy injury could tip the scale in favor of the Jazz., especially considering Golden State will be without Klay Thompson as well.

Kevon Looney is questionable for tomorrow's game in Utah with a left quad contusion. Happened on a collision while setting a screen last night in OKC. He's played every game this season. The Warriors' only currently healthy true center. Andre Iguodala out with back tightness.

Heading into tonight’s intraconference matchup, Utah is a two-point favorite. Despite Golden State losing Andre Iguodala and Draymond Green, the team continues to play some of the best basketball. Can they win without Klay Thompson? Think about picking the Warriors to win, they will cover the spread and the total will go under 221.5. If you want to learn more about NBA betting, check out our handicap betting guide. Other NBA Picks are on the main page.