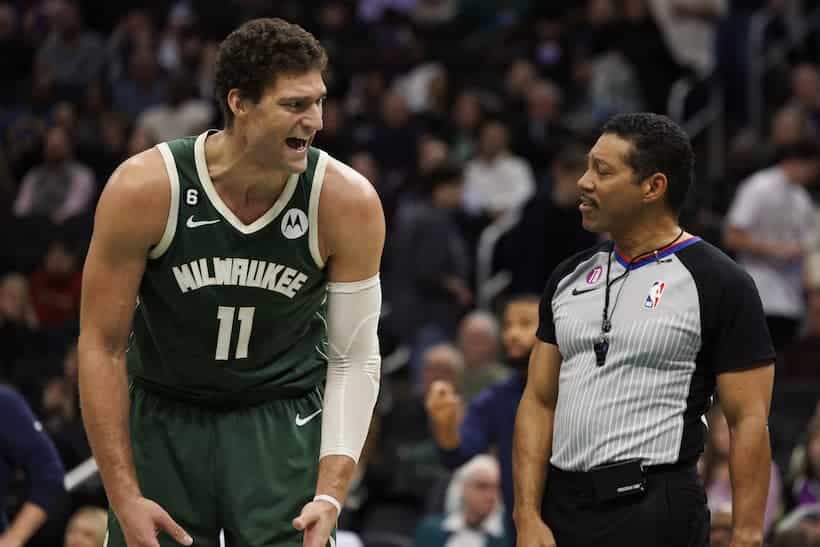 The Milwaukee Bucks were without Giannis Antetokounmpo for their third straight game as he works through a knee injury. Toronto came into the game last night with no fear and battled the Bucks hard all game long. Late in the fourth quarter, Milwaukee’s Brook Lopez and Toronto’s Gary Trent Jr. got in an altercation, and it resulted in Lopez’s first career ejection. It happened for a very unique reason and Lope had some interesting comments after the game.

Lope was ejected from the game with 19 points and three triples made. His altercation with Trent Jr. was enough for an ejection and luckily the Bucks would be able to hang on for the 130-122 win without their big man for the finals six minutes of the fourth.

Wisconsin Sports Betting sites have the Bucks at (+700) to win the Finals this season.

Not only did Lopez revive a fine for being ejected from the game, but he also received another fine for the comments he made about the refs after the game. He was literally quoted saying “they made some mistakes tonight” in reference to the refs in the game.

After Jrue Holiday made he layup, you can see Lopez and Trent Jr. with arms locked up and then Lopez just decided to whip his opponents head band off. Certain times the refs have to make a critical decision to calm down the tempers in a game and that’s likely what happened to Lopez. Ripping the head band off another player certainly isn’t the worst thing we’ve seen happen in an altercation.

Speaking with the media after Milwaukee’s win, Lopez had these interesting comments to say about Gary Trent Jr.’s head band.

The veteran center was clearly kidding and he took his first career ejection quite well after he calmed down. He will likely be out for the Bucks next game this Saturday vs the Cleveland Cavaliers. Milwaukee will need Giannis Antetokounmpo back if they want to win that game.