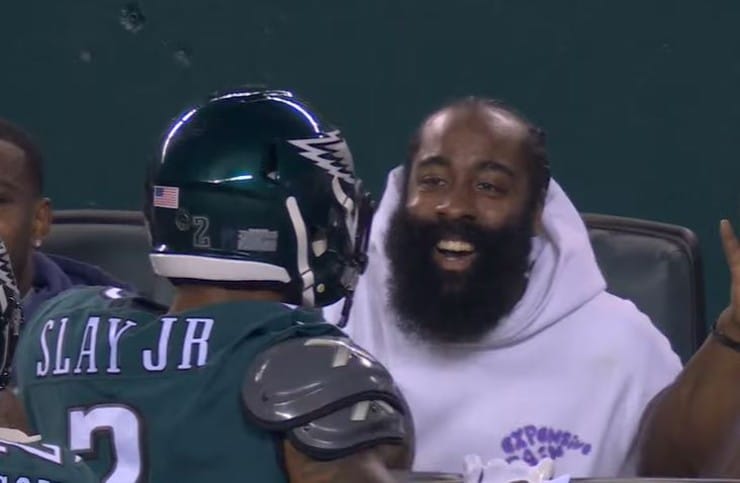 While on second down in Philadelphia territory, the play occurred at the 10-minute mark during the third quarter. The pass was intended for Vikings WR Justin Jefferson.

After intercepting the ball, Slay sprinted over to Harden — who had front-row seats — to give him the souvenir. Watch the full video below.

Of course, Slay had a phenomenal night against the Vikings. The 10-year NFL veteran finished his performance with two interceptions, five passes defended, and one solo tackle.

After signing the football for Harden at Lincoln Financial Field, the Sixers guard tweeted: “First Eagles game was lit! keep ballin bro @bigplay24slay.” Watch the cornerback sign the pigskin in the tweet below.

Additionally, the Eagles snapped their two-game losing streak in Vikings matchups. This was Philadelphia’s first win over Minnesota since the 2017 NFC championship game. Not to mention, the all-time series record between these NFC contenders is now even at 15-15.

.@JHarden13 made sure to get that game ball signed@bigplay24slay | @Eagles pic.twitter.com/djhJ8NqcQz

For NFL Week 3, the Eagles play the Commanders on the road this Sunday at 1 p.m. ET. After the matchup with Washington, the team faces off against the Jaguars in Week 4.

While the Commanders game is taking place at FedEx Field, perhaps Harden will still attend one more Eagles game before the 2022-23 NBA season begins. He’ll probably watch another game with front-row seats again.

Rivers wants his training camp sessions held at McAlister’s Field House, The Citadel’s basketball arena. The public senior military college is one of the best schools in the south.

Rivers also changed the training camp location, hoping his team will remain better focused this year. James Harden and fellow teammate Joel Embiid are ready to win an NBA championship for the City of Brotherly Love.