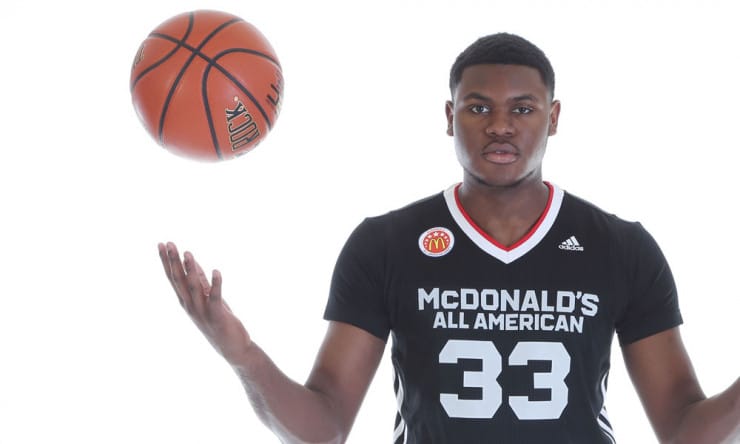 When the top high school prospects in the country make their deliberations about which university they will ultimately attend, nearly all of them give strong consideration to the big, respected college hoops programs like Duke, Kansas and obviously Kentucky. Those schools create the easiest paths to the NBA, especially for the kids who go one-and-done.

That’s why it was so odd that Diamond Stone, ranked as high as No. 5 in the country by some sources, chose the University of Maryland as his school of choice.

Stone, though, isn’t a flashy guy, whatever his birth name may suggest. He chose a less flashy school and made a modest announcement. That, apparently, is just the kind of kid that he is.

“I could’ve done the big ESPN thing here at school,” Stone told Basketball Insiders. “I just didn’t want any of the attention. I just wanted to make my decision.”

As for why Maryland, Stone said it had just as much to do with academics as it did basketball.

“Academics are a big thing actually for me because you’re only playing basketball for so long and you need to have a plan B,” Stone said. “So my plan B is I’ll probably go into something around sports (when playing basketball is over), maybe even a coach or become a trainer of some sort.”

He also admitted that his parents had a lot to do with his choice of school.

“My parents actually make all my decisions,” he admitted casually. “They felt like it was the place for me, academically and basketball-wise. My friends have no say in anything, so I just leave it to my parents.”

The basketball side of things leaves plenty of room for optimism, too, particularly following the Terrapins’ commitment last year from Melo Trimble, who Stone says will be back for another year in Maryland. That played a big role is decision to end up there.

“He is a great guard that can shoot the ball so teams can’t double-team you, and I think that Melo and I, we could be unstoppable together,” Stone said.

At the end of the day, despite the big lights of the more storied programs, Stone just believes that Maryland will give him the best college experience, both in terms of basketball and everything else that comes with it.

Sometimes, it’s just about fit, and Stone clearly fits at the University of Maryland.