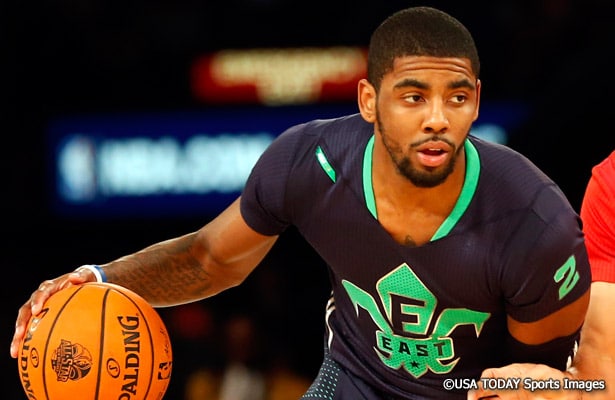 A Record Setting Night To Remember

The Western Conference entered the 2014 NBA All-Star game as winners of the previous three contests and four out of the last five overall. Prior to the start of the 63rd annual game, All-Star forward LeBron James said it was his primary mission to put an end to West’s recent dominance and the veteran successfully achieved his goal.

After trailing by as many as 18 points, the Eastern Conference rallied to pull out an absolutely entertaining 163-155 victory behind Kyrie Irving’s 31 point and 14 assist effort. Irving, 21, took home MVP honors after leading the spirited second half comeback, scoring 24 points in the process.

“I was going out there trying to compete,” Irving told the assembled media postgame. “It’s a great honor.”

Both teams set the offensive tone early by combining to score 165 first half points, setting an All-Star game record in points scored in a single half of play. The previous record of 157 was established in 1988.

The West took a 89-76 lead into halftime and were led by forward Kevin Durant’s 22 points, while Carmelo Anthony poured in 18 for the East.

The game featured plenty of spectacular dunks and flashy passes but at the conclusion of the event turned out to be record-setting.

Here is a look at some of the records set tonight:

– Most three-pointers made by a player – Carmelo Anthony (8)

Outside of the records set tonight, plenty of players put on a show for the fans:

There was a legitimate reason to believe late in the contest that the record would fall on Sunday night as Durant (38) and Griffin (38) both seemingly had a shot to make history for the West.

Irving (31) and Anthony (30) paced the Eastern Conference in scoring on Sunday.

Dallas Mavericks forward Dirk Nowitzki made his twelfth All-Star game appearance. However, it marked the first time the aging veteran failed to score in the midseason classic. Nowitzki missed both of his shot attempts and logged just over eight minutes on Sunday’s clash.

First Time All-Stars Hold Their Own

Each year a new batch of talent reaches their respective All-Star potential and enters the national stage. This year’s crop more than held their own in their first appearance under the bright lights.

– DeMar DeRozan scored 8 points, pulled down 3 rebounds and had two assists in 15 minutes

– Paul Millsap had 6 points and 3 rebounds in 15 minutes

– Stephen Curry posted a double-double with 12 points and 11 assists, despite shooting just 2-for-11 from three-point range on the night (27 minutes)

All-Star games typically are a good opportunity for the game’s elite big men to showcase their finishing skills, but we can’t forget the floor generals feeding them the ball and making it all happen. On Sunday night three players finished with 10 or more assists – Irving (14), Chris Paul (13) and Curry (11).

This stat is for fun and doesn’t mean anything in the grand scheme of thing, but Durant put up a better individual stat line than Miami’s trio of All-Stars – combined.