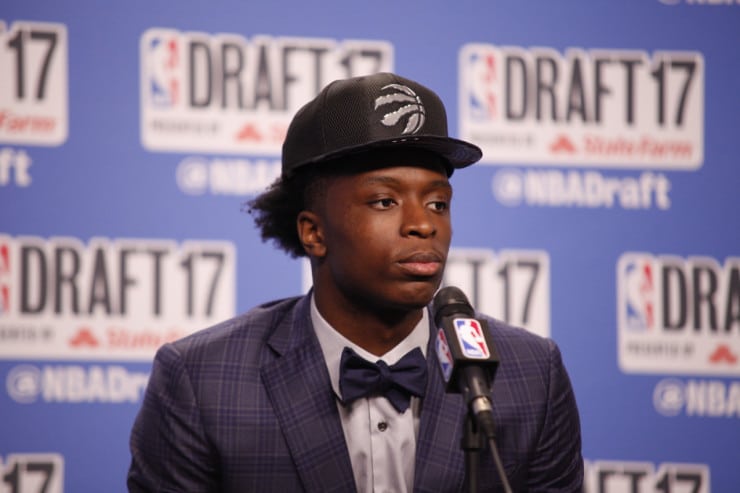 The Toronto Raptors weren’t going to fix all of their problems with the 23rd pick in the draft, but getting OG Anunoby that late in the evening is tremendous value, even if he won’t see the floor until early 2018. Coming off a torn right ACL, Anunoby was the sort of uber-athletic defensive stud that would have been a sure-thing lottery pick this year had he not been injured. While it must have been awful for Anunoby to slip farther down draft boards than he probably expected, he does end up with a team that could potentially be an Eastern Conference finalist next year.

More than anything Anunoby is known for his defensive capabilities, as he should be able to guard everything from point guards to power forwards. He is an absolute freak athletically, which obviously lends itself to defense, as he can chase guys down on breaks, jump out of the gym to swat away shots, and muscle guys away from their intended offensive purpose. Some have said his defensive ceiling is Kawhi Leonard, which is generous, but those are the skills and the measurables he represents on that end of the floor.

Offensively, he is not Kawhi Leonard. Anunoby is incredibly raw on the offensive end, and that’s an area where the Raptors will have to be patient with him. Thanks to his athleticism, he’s an outright joy to watch on the fast break and is an amazing finisher at the rim. He doesn’t shoot particularly well, however, which means while his offensive instincts are generally good, he doesn’t have the ability to create or shoot particularly well.

It’s going to be a while before he takes the court, but Anunoby is a steal this late in the draft.