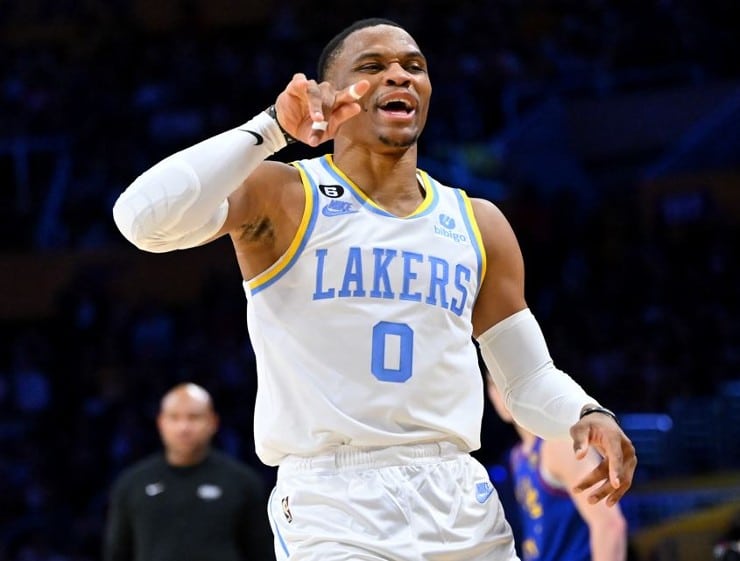 Ahead of the NBA trade deadline on February 9, we’re taking a look through potential trades that could go through as teams finalise their rosters for the rest of the season.

Derrick White joined the Boston Celtics’ charge through the Eastern Conference with Josh Richardson, Romeo Langford, a 2022 first-round pick and 2028 first-round swap going the other way to San Antonio.

The biggest question on everyone’s mind is whether the Los Angeles Lakers will bite the bullet and trade Russell Westbrook, or will they hold on to their Sixth Man of the Year candidate who becomes an unrestricted free agent this offseason?

1. Lakers trade Westbrook to Indiana for Turner and Hield

His first 5-game span averaging those numbers or better since February 2020. pic.twitter.com/4Oiiic9Ryn

Rumours have floated for months over Los Angeles Lakers owner Jeanie Buss’ reluctance to include Russell Westbrook in a trade to the Indiana Pacers for Myles Turner, Buddy Hield and two first-round picks due to his improved play off the bench.

A trade for Myles Turner could potentially open up the floor for big man Anthony Davis, who was enjoying an MVP-calibre season before an untimely injury put a halt to his season.

The 26-year-old, who has been with Indiana since being drafted in 2015, is shooting a career-best 40% from downtown in 39 games this season and would be a welcome addition to LeBron James’ side alongside Hield who leads the NBA with 181 made three-pointers on 42%.

"I'm told there are several teams beginning to engage with significant interest in Jakob Poeltl, that includes the Raptors and Celtics."

NBA Insider @ShamsCharania reports on the trade interest in the Spurs center. pic.twitter.com/FQ9oPO4xSC

According to The Athletic’s Shams Charania, there are two teams heavily interested in trading for San Antonio Spurs big man Jakob Poeltl before the February deadline – the Boston Celtics and Toronto Raptors.

The 27-year-old center becomes an unrestricted free agent this offseason and is expected to demand around $20 million per season on a new deal, having rejected the four-year $58 million maximum extension offered by San Antonio.

A trade would likely need to include Boston’s Grant Williams, who will enter restricted free agency this summer and is expected to earn around $15 million a season. The 24-year-old is averaging 9.1 points and 4.7 rebounds a game on 86% shooting from the free throw line, 41% from three and 60% inside two-point range.

A trade for Poeltl would significantly boost Joe Mazzulla’s depth in the frontcourt and act as insurance for Robert Williams who continues to deal with knee injuries and 36-year-old Al Horford, who doesn’t play on back-to-backs.

A @BleacherReport Exclusive: Jae Crowder has support of Pheonix Suns teammates as he expresses frustration with how things got here: “I'm confused and hurt my coaches didn't appreciate the things I brought to our team and organization.” https://t.co/KmuqoqpvKt

In September 2022, Jae Crowder and the Phoenix Suns mutually agreed to let the 32-year-old sit out for the 2022-23 season until Phoenix found a suitable trade partner for him.

Rumours began to heat up in December that a three-team trade including the Suns, Bucks and Houston Rockets had almost been agreed that would send Crowder to Milwaukee, four Bucks second-round draft picks and players to Houston and Eric Gordon and/or Kenyon Martin Jr. to Phoenix.

Milwaukee star duo Giannis Antetokounmpo and Khris Middleton have missed a combined 50 games this season and will need extra depth and quality to continue competing with Eastern juggernauts like the Celtics and Brooklyn Nets.

Rui Hachimura on if he wants a trade: [Raises eyebrows], “I don’t know,” [laughs].

On if he asked for a trade: “No comment [smiles].” pic.twitter.com/q8PDffLcrv

Washington Wizards forward Rui Hachimura ignited trade rumours when speaking to reporters after tying his career-high with 30 points off the bench in a blowout victory over the Orlando Magic on Saturday.

The Japanese first-round pick played just 42 games last season and has not started once this year, but certainly possesses the talent to become an important starter in the league and was named to the All-Rookie Second Team in 2020.

A trade to Phoenix would likely need to include a selection of Cameron Payne, Torrey Craig and Dario Saric – it was reported earlier this season that the Suns had rejected a proposal from Washington for Hachimura in exchange for Jae Crowder.

James Wiseman in the loss

After being drafted with the number two overall pick in the 2020 NBA Draft, hopes at the Golden State Warriors were high for big man James Wiseman out of Memphis.

Since then, it has been nothing but disappointment for the 2022 NBA champions and the 21-year-old is averaging 6.8 points and 3.6 rebounds per game from 19 appearances this year.

The seven-footer has had multiple trips to the G League and is yet to find his feet within the NBA, but a new situation could provide fresh hope and optimism for his career on a team with little to no expectation.

The Charlotte Hornets have the second-worst record in the Eastern Conference and could feature in a trade including Mason Plumlee and picks.