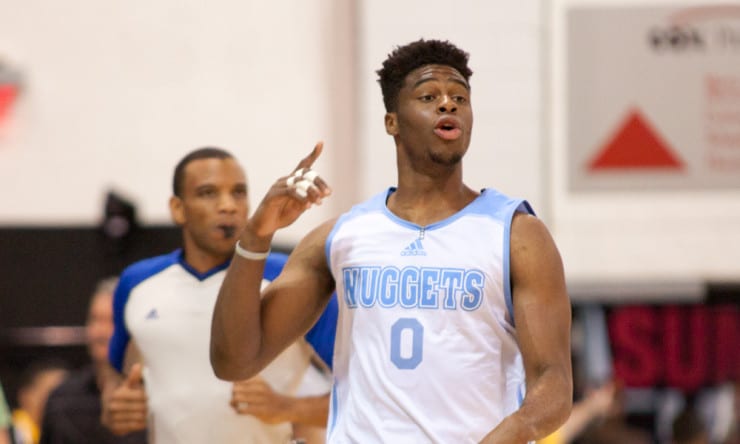 It felt like an eternity. The tension suffocated the masses in Brooklyn’s Barclays Center. Collective silence. Focused discernment.

Could the Los Angeles Lakers truly cut against the grain and pass on Duke’s Jahlil Okafor with the second overall pick in the 2015 NBA Draft? Were the reports true in that Mitch Kupchak had fallen in love with the southpaw from Ohio State University?

Those who think the NBA takes a break following the Finals are quite mistaken. This is a sport that has year-round activities for supporters to follow, including the NBA draft lottery, the Combine, the NBA draft and competitive summer leagues. Above all, monitoring free agency undoubtedly provides the highest level of excitement for fans and contains enough drama to rival any television soap opera. Daily – even hourly – checks on various news feeds and Twitter (and here at Basketball Insiders!) have proven to be mandatory actions to check the status of 2015 restricted and unrestricted free agents. We need to know which players are moving, which players are staying and how teams are shaping up for the upcoming season.

The amount of free agency activity since teams were allowed to begin negotiations with free agents on July 1st is staggering. No signings could occur until July 9th, and now, newlines are loaded with confirmations of player signings.

The Sacramento Kings haven’t posted a .500 record in any season since the 2005-06 campaign when players such as Corliss Williamson, Brad Miller, Kenny Thomas and Brian Skinner donned the uniform.

This also marked the last time the team reached the playoffs.

Since then, the team and its fan base has had seven different head coaches, an ownership change, a planned relocation, front office overhauls and plenty of roster transformations. In short, the team has been marred by plenty of drama away from the court, without exactly producing fireworks on it.

Mudiay May Prove to Be a Steal

Emmanuel Mudiay didn’t get selected as high as his camp expected in the 2015 NBA Draft, falling past potential landing spots such as the Los Angeles Lakers at No. 2, Philadelphia 76ers at No. 3, New York Knicks at No.4 and Sacramento Kings at No. 6.

However, even though it took a bit longer for him to hear his name called on June 25, going No. 7 to the Denver Nuggets could be great for him in the long run.

If goes as planned, Mudiay will become a franchise cornerstone for Denver and emerge as their starting point guard of the future. It may even happen sooner than later, especially since this offseason rumors have circulated that Ty Lawson is unhappy and wants a trade.

HEAT Should Be Among East’s Best Next Season

The Miami HEAT entered the 2015 offseason with perhaps the most to lose out of any team in the Eastern Conference. The team was faced with pending roster decisions from Dwyane Wade, Goran Dragic and Luol Deng, which ultimately ended with all three players staying put in Miami.

This could have played out like the Portland Trail Blazers’ offseason, with numerous veterans leaving as free agents. Instead, returning those three players to the team next season will immediately make the HEAT a contender. Had it not been for Chris Bosh missing a significant portion of the 2014-15 campaign due to blood clots in one of his lungs, the team likely would have made the playoffs. Without Bosh, they finished just one game behind the eighth-placed Brooklyn Nets for the final playoff spot in the East.

As far as the Eastern Conference goes, the Central Division is where a lot of the excitement will be next year. With two of the top three teams in the East last season coming from the Central and other up-and-coming teams in that division having made some nice additions in the offseason, it sure does look like four of the conference’s eight playoff seeds will come from these five teams.

All that said, here’s a look at how the teams in the Central Division stack up following the draft and big free agency moves. If you missed it yesterday, Basketball Insiders kicked off this series by ranking the Pacific Division teams.

Some players study Kevin Durant for the way he can hit a shot from anywhere on the floor. Others observe how gets to the basket with ease.

Rondae Hollis-Jefferson carefully watched how Durant approached his free throws. More significantly, he paid attention to how the former MVP shimmied before release.

While playing at the University of Arizona, Hollis-Jefferson decided to incorporate a Durant-inspired move into his own free throw routine. Instead of only moving his shoulders like Durant, he also swiveled his hips.

The Southwest Division, comprised of the three Texas teams (Houston, Dallas and San Antonio) as well as New Orleans and Memphis, is by far the strongest division in the NBA. Last season, all five teams made the playoffs out West and each won between 45 and 56 games.  It’s pretty amazing, as no other division even had four teams make the playoffs to say nothing about the entire division qualifying for the postseason.

The strength of the division will be a little more top heavy as the Mavericks will presumably fall off significantly, while the Spurs will jet to the top of the NBA’s elite from day one. Despite these offseason changes, the Southwest is still the juggernaut division that other teams will dread facing in extended, brutal road trips.

The Thunder Have Retooled

The Oklahoma City Thunder have always been a progressive franchise. Long-term planning, strategic cap manipulation and an analytic approach to resources has kept the Thunder among the NBA’s elite for almost a decade. How the Thunder have worked the system over the last year is an interesting look at how teams that are spending big money have to look at the world.

So with that in mind, let’s dig into how the Thunder worked the system to create tools to help them exploit the rising NBA economy and why they did some of the deals they have done.

The 2015 NBA offseason has been as entertaining as any offseason in recent memory. From the 2015 NBA Draft, to the San Antonio Spurs bolstering their already formidable roster, to teams spending huge money on free agents in anticipation of the rising cap, to the DeAndre Jordan saga, there has been a lot of entertainment and change across the NBA.

Perhaps no team better represents those dynamics than the Los Angeles Clippers. Less than two weeks ago, Clippers shooting guard J.J. Redick joined Nicole Zaloumis and Ric Bucher on Bleacher Report Radio to talk about his team’s offseason. At the time, Redick had less than flattering things to say when asked to grade the Clippers’ offseason up to that point.

The team here at Basketball Insiders has previously ranked the Pacific, Central, Southwest and Southeast divisions.

Today, Tommy Beer examines the reshuffled Atlantic Division and ranks each team from worst to first.