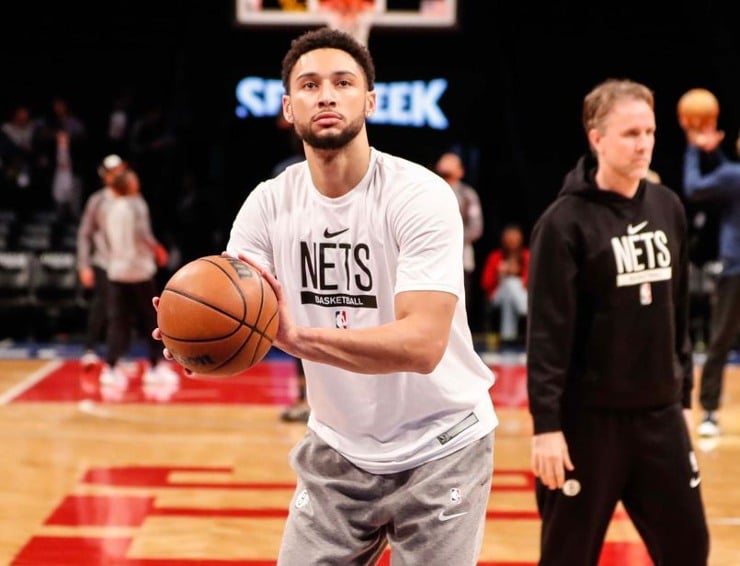 Over the last five games, Ben Simmons has the best net rating (+21.7), defensive rating (106.6), and offensive rating (127.9) with the Brooklyn Nets. What has changed since the first couple of weeks this season? Kyrie Irving provided his answer when asked why Simmons is playing so well.

“I think he could probably answer that better,” said Irving. “But me as a teammate, just seeing him smile, have fun and be competitive, that’s him being himself. “So anytime he could just be himself and trust that we have his back, I feel like he’s the best version of himself.”

Based on a few NBA betting sites, Ben Simmons and the Nets now have the third-best odds to win the championship in 2023. Sportsbooks are giving the Boston Celtics and Milwaukee Bucks better odds.

Ben Simmons and the art of finding someone cutting back door. pic.twitter.com/JpozsEFlWu

While Ben Simmons is just the eighth-best scorer on the Nets, he is currently averaging 6.2 assists and 1.4 steals per game, which leads the team in both metrics. More importantly, the three-time All-Star has top-10 odds to win Defensive Player of the Year in 2023, so that’s saying something.

Through 24 appearances this season, Simmons is averaging 8.3 points and 6.8 rebounds per game. Plus, he’s shooting a career-best 61.2% from the field. Despite logging a career-low player efficiency rating of 15.8, the Nets guard is also posting a true shooting percentage of 60.3%, the highest of his five-year career.

Furthermore, the Nets guard is an important player to the team. That should go without saying. His positive impact will not always show up on the scoreboard. Though, if he can average more points per game, Brooklyn would become an even better playoff contender.

On Monday, in Brooklyn’s 125-117 win over the Cleveland Cavaliers, Ben Simmons ended his night with four points, nine rebounds, eight assists, three steals, and one block in 34 minutes played.

The Nets are 20-7 since Jacque Vaughn took over.

The best record in the NBA over that span. pic.twitter.com/uRRx44nInl

“We stripped our playbook, and we created a little momentum,” Nets coach Jacque Vaughn said after the win. “Guys are playing extremely free of mind and they’ve done an unbelievable job keeping the focus on basketball.”

Under Vaughn, the Nets are a league-best 20-7 since Steve Nash was fired. They have the third-best point differential, fourth-best offensive rating, third-best net rating, and best field goal percentage in the NBA.

At the moment, Brooklyn is averaging 114.4 points per game while allowing just 111.3 points per contest. Defensively, the Nets would not be the same team without Ben Simmons.