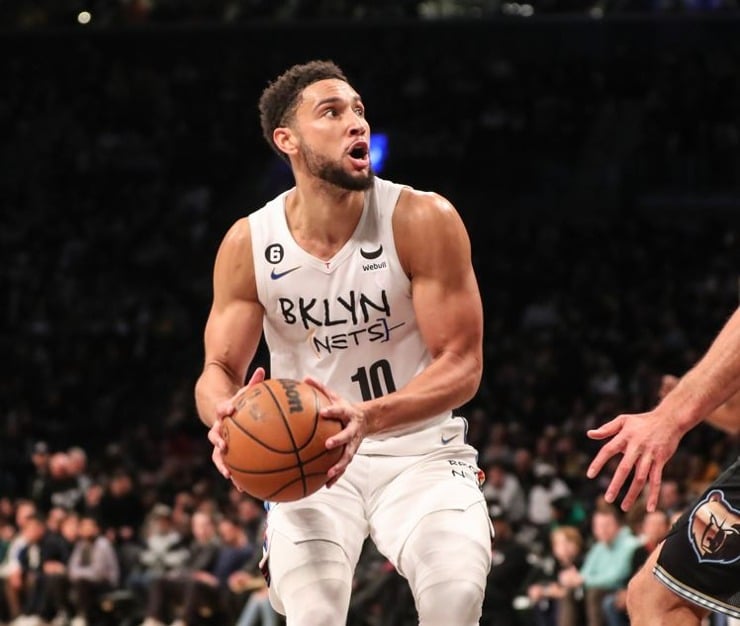 Brooklyn Nets guard Ben Simmons is preparing for his team’s next game against the Philadelphia 76ers on Tuesday night, and the three-time All-Star is working on blocking out noise from Philly fans as well.

Since Simmons missed all of last season due to a contract dispute, back injury, and mental health problems, this highly anticipated matchup is the guard’s first appearance in a Nets uniform at Wells Fargo Center.

Per multiple NBA betting sites, the Nets have the sixth-best odds to win the championship in 2023. Check out which sportsbooks are showing higher odds for the Boston Celtics and Milwaukee Bucks in the Eastern Conference.

Ben Simmons put up a season-high 22 PTS while shooting 84.6% from the field to lead the @BrooklynNets to victory! #NetsWorld

“I’m just staying focused,” Ben Simmons said, following Brooklyn’s 127-115 win over the Memphis Grizzlies. “I’m taking it day by day. That’s honestly what it is. I’ve got to take it day by day.”

“Me personally, if I start reading everything that’s going on and getting psyched out, that’s not good for me,” continued Simmons.

For me, I just want to stay focused, take it day by day, and I keep saying it but that’s what it is for me. Just keep building on good days and staying locked in.”

“I’m ready to play,” the guard added, when asked about playing in front of Philly fans. Then, Simmons noticed reporters laughing around the room. “Something going on?” asked the 26-year-old.

Reporters then asked Ben Simmons if he believes enough time has passed and whether any sour relations between him and the fanbase still exist.

Ben Simmons gave a smirk when asked if he thought enough time has passed for his Philly turmoil to blow over:

“In Philly? I know what’s coming, but it’s part of the game.”

“In Philly?” the Nets guard asked as he gave a smirk. It was the perfect meme face. “I know what’s coming. That’s part of the game. Philly fans, one thing about Philly fans is they are incredible. They are die-hard Philly, and they are everything Philly, whatever it is.

I respect that about the city. It’s a sports town. I was talking to I think Yuta [Watanabe] before the game about what it’s like to play in Philly, and it’s an incredible opportunity to put on whatever jersey it is. That’s Philly, and it’s a unique experience.”

Ben Simmons’ last game in a Sixers uniform was Game 7 of the second round of the 2021 NBA Playoffs against the Atlanta Hawks. The 76ers lost 103-96 on their home court. And the guard scored just six points.

“I was 18 years old coming into Philly, so it’s really the only place I’ve lived as an adult. So, I have a lot of love for that city,” continued Ben Simmons.

“People don’t know that, but a lot of my best friends are from Philadelphia. My brother still lives in Philadelphia. So regardless of the situation, whatever happened, happened. But I got a lot of love for that city still, so I look forward to going down there and playing.”

Furthermore, the Nets are 2-1 in their last three meetings versus the 76ers.