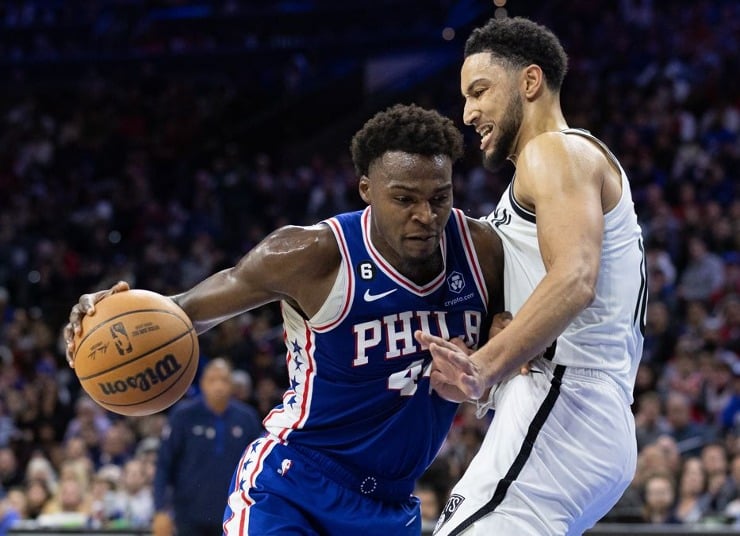 On Tuesday night, Brooklyn Nets star Ben Simmons received loud boos throughout his team’s matchup against the Philadelphia 76ers at Wells Fargo Center. It was the guard’s first game in Philadelphia since last season’s trade.

“I feel like I’m in a good place,” Simmons said after the Nets’ 115-106 loss to the Sixers. “I’m happy, I’m doing what I love. So, to be out there and have that experience was amazing.

Based on a few NBA betting sites, the Nets have the sixth-best odds to win the championship in 2023. Check out which sportsbooks show higher odds for the Boston Celtics and Milwaukee Bucks.

Ben Simmons on the reception he got from the crowd in Philly tonight:

"I thought it was going to be louder" pic.twitter.com/CGdd0WqnPO

Obviously, it wasn’t the result we wanted. It’s frustrating to lose a game like that, but I think it’s a good step forward.” Fans were heard chanting “F—k Ben Simmons!” during the game. And Philly fans booed him each time he touched the ball.

“I thought it was going to be louder,” he said on the fans booing him throughout the game. The fans impacted Simmons’ play more in the second half compared to the first.

The three-time All-Star put up only two points in the second half and was held scoreless in the fourth quarter. Though, the former Sixer still contributed for Brooklyn.

“I think it’s going to be like this forever,” Simmons mentioned on whether Philly fans will ever welcome him back to the arena again. “I really don’t see it changing.”

KD, Kyrie AND BEN SIMMONS are getting embarrassed at Philly by the Sixers without Maxey, Harden AND JOEL EMBIID.

Philadelphia outrebounded Brooklyn 49-35 without Joel Embiid, James Harden, and Tyrese Maxey. The Nets also committed 15 turnovers. While the 76ers shot 50% from 3-point range, the Nets shot a disappointing 32.1% behind the arc.

“Everybody wants to see our team fail,” Kevin Durant said after the loss. “Nobody likes Ben. Nobody likes Ky. And nobody likes myself.”

Durant scored 20 points in 37 minutes off 9-of-15 shooting overall. Counting this loss, the Nets are now 8-10 and rank 10th in the Eastern Conference standings.