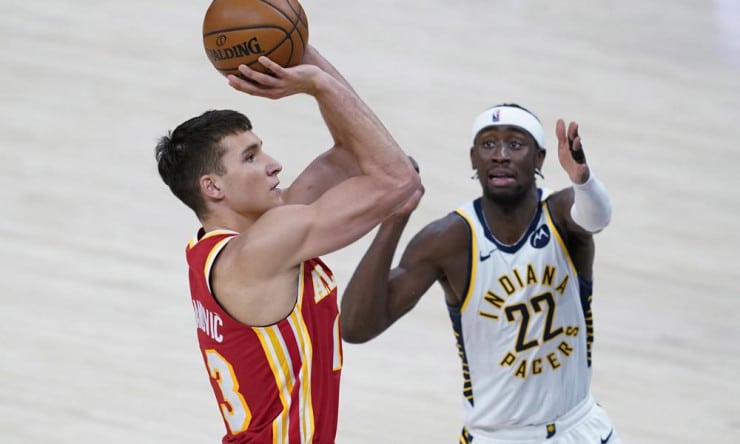 Atlanta Hawks SG Bogdan Bogdanovic will miss his seventh straight game to start the 2022-23 season. He had to have a procedure on his knee and has been working to get back to getting back on the court.

Luckily, the Hawks added Dejounte Murray in the offseason and he’s been a great addition for Atlanta. He’s helped the Hawks get out to a 4-2 start and are first place in the Southeast division.

Bogdanovic will likely be the sixth man for the Hawks and they’ll need him back when the season gets going fully.

Travis Schlenk, on the TV broadcast, on Bogdan Bogdanovic:

"Tonight was the first night he started playing one-on-one (pregame). We're going to start reintegrating him into practices when we get back off this road trip."

Hawks general manager Travis Schlenk gave an update in regards to where Bogdanovic was in the recovery process. The plan is to reintegrate him back into practice when Atlanta gets back from their road trip. Last Friday was the first time Bogdanovic was playing one-one-one in pregame warmups. Their road trip will end after the play the Knicks on Wednesday.

Come see us in the 🅰️

This was a new challenge for Bogdanovic, but he was ready to face it.

It’s good to see that he’s optimistic with the recovery process. It can be different for every player. Some bounce back even stronger than they were before the injury and some are never the same again. He said he was dealing with a lot of pain last season where he played in 63 games. Bogdanovic also added that this had been an injury that he’s been dealing with since the start of his career. He’s admitted that he’s been hesitant to let loose after the injury. That’s a mental battle that all players deal with when recovering.