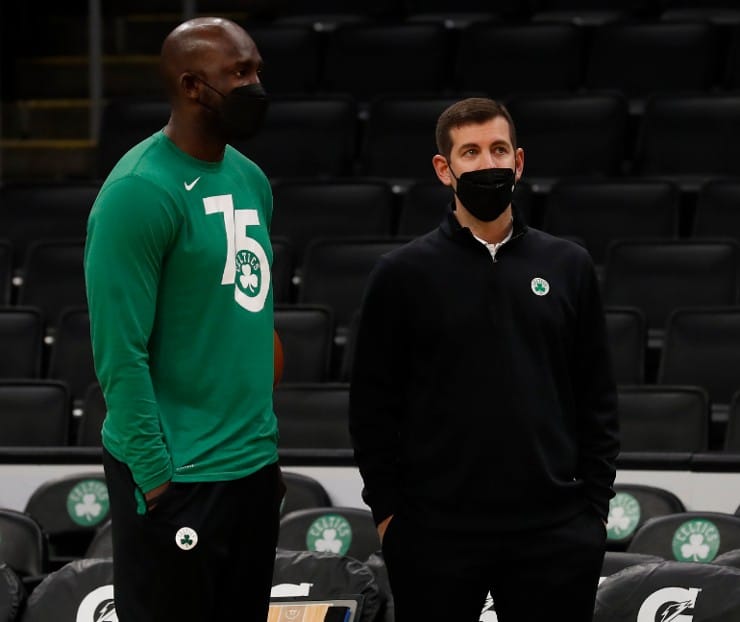 After the Los Angeles Lakers missed the playoffs, rumors surfaced on who would replace Frank Vogel as head coach; Brad Stevens was mentioned. However, in an interview on 98.5 The Sports Hub’s “Toucher & Rich,” the former coach was not amused. When asked whether or not it was an entertaining idea for him to leave the Boston Celtics, he replied, “No, not entertaining.”

This conversation alone should wipe out any speculation. “First of all, I have no idea what my future holds. I’m in one of those positions where someone decides to move on from me and this is the world we live in. I’m definitely not leaving to go to the Lakers. I know that for a fact.”

Not to mention, according to Sports Illustrated and NBC Sports Boston writer Chris Mannix, one other reason Brad Stevens would never consider the Lakers’ coaching job is because of Frank Vogel. They are good friends. Plus, Vogel served as an assistant coach for the Celtics from 2001 to 2004.

Among the *many* reasons Brad Stevens has no interest in the Lakers: He’s very close with Frank Vogel. https://t.co/0eGCT6N8sl

Nonetheless, despite possessing a record above .500, the C’s failed to make it back to the NBA Finals. Since Paul Pierce, Kevin Garnett, Rajon Rondo and Ray Allen helped Boston win its 17th championship in 2008, the team has settled for mediocrity. Let’s call a spade a spade.

Furthermore, the Celtics reached the Eastern Conference Finals three times under Stevens: 2017, 2018 and 2020. Though, while Stevens is arguably the greatest NCAA Division I basketball coach for Butler of all time, his success in college never carried over to the professional level. The coach’s system is centered around ball movement and team work.

On Jun. 2, 2021, Danny Ainge stepped down as the Celtics’ president of basketball operations. In the same day, the organization also announced that Stevens would replace him. In his first month as the team’s new general manager, he hired Ime Udoka as head coach on Jun. 28, 2021.

During the 2021 NBA Draft, Brad Stevens selected Juhann Begarin 45th overall in the second round. The guard played for the Celtics in the 2021 NBA Summer League. But, he returned to Paris Basketball of the LNB Pro B on Aug. 20.

The Celtics finished 51-31 (.622) in the regular season, ranking second overall in the Eastern Conference standings. For the first-round series of the 2022 NBA Playoffs, they face off against the Nets on Sunday, Apr. 15 at 3:30 p.m. ET.