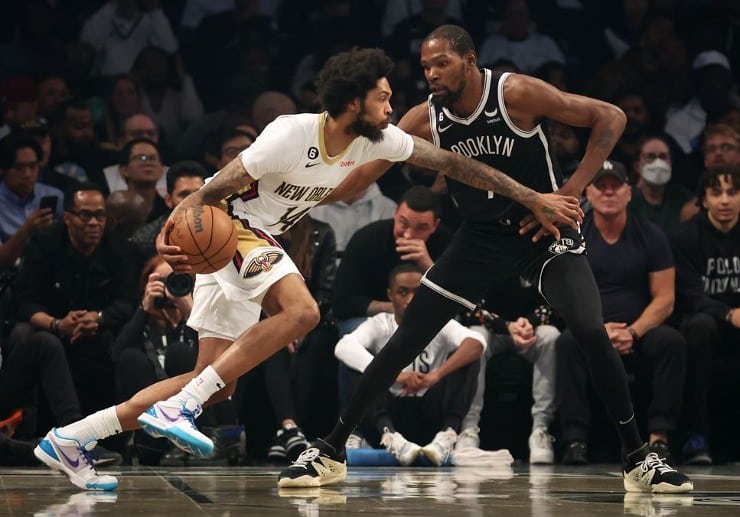 Following the Pelicans’ 130-108 win over the Nets, reporters asked Ingram about his conversation with the two-time Finals MVP. “I think he was trying to butter me up a little bit so I would come out there a little soft,” said Ingram jokingly.

A few NBA betting sites are giving the Pelicans the 13th-highest odds to win the championship in 2023. Some sportsbooks are counting on them returning to the playoffs this season.

When asked about Kevin Durant complimenting him before the game, Brandon Ingram joked: “I think he was trying to butter me up a little bit so I would come out there a little soft”

Ingram appreciated the praise from KD, and called him “probably the best player in our league” pic.twitter.com/Ht9P7NpQmD

“And I definitely want to show up every single night and eventually be a household name, like he’s been in this league. So, it’s always good hearing good things from the greats in this league.”

Ingram ended his performance with a team-high 28 points in 31 minutes played, along with 7 rebounds and 5 assists. He finished 10-of-17 shooting from the field and 2-of-4 from beyond the arc.

Likewise, Durant led the Nets in scoring with 32 points. The 12-time All-Star also closed out his night with 3 boards and 2 assists while shooting 11-of-21 from the floor and 2-of-6 from 3-point range.

Moreover, Zion Williamson appeared in his first regular season game since the Pelicans’ 108-103 loss against the Golden State Warriors on May 4, 2021.

Williamson amassed 25 points, 9 rebounds, and 3 assists in 30 minutes played. He shot 11-of-22 from the floor. The fourth-year player finished second in scoring behind only Brandon Ingram.

“It’s like he didn’t miss a beat,” Pelicans head coach Willie Green said after the game. “You just throw the ball to him and watch what he does.”

According to Basketball-Reference statistics, Ingram is projected to average 24.3 points, 6 rebounds, and 5.5 assists per game with the Pelicans in the 2022-23 season.

Durant wanted to psych Ingram out prior to the game. However, the 25-year-old came prepared. He’s already on a path towards greatness.

Ingram won NBA Most Improved Player in 2020 and logged a career-high 5.6 assists per game with New Orleans last season.

When Durant is at his best, he’s the best player on the Nets. Williamson is one of the top players in the league when healthy.

Although, Brandon Ingram was the No. 1 ranked forward on the Pelicans during Williamson’s absence last season. Their frontcourt needs him.