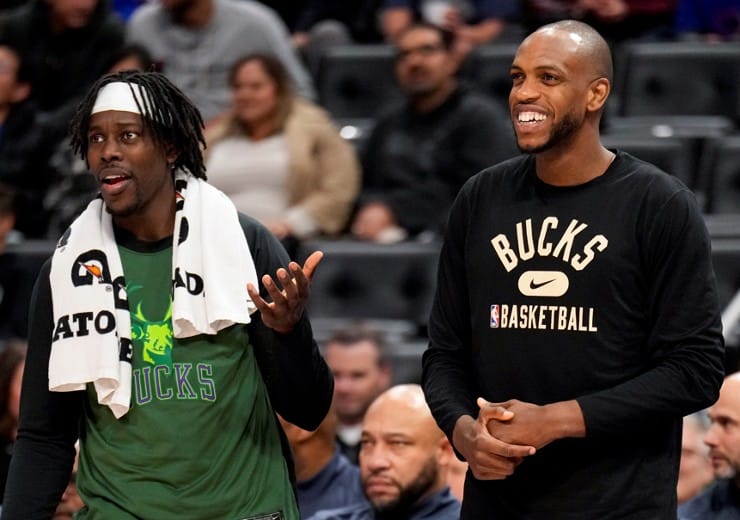 Milwaukee Bucks’ forward Khris Middleton is now expected to miss the team’s second-round playoff series against the Boston Celtics. On Thursday morning, the 10th-year veteran was diagnosed with a Grade 2 left MCL sprain. Typically, a Grade 2 MCL injury can take between two to four weeks to heal.

Furthermore, in a total of 66 games played during the regular season, the three-time All-Star averaged 20.1 points, 5.4 rebounds and 5.4 assists per game. During the Bucks’ first-round playoff series against the Bulls, Middleton finished his Game 1 performance with 11 points, five rebounds and six assists.

The left MCL injury of Bucks All-Star Khris Middleton is a Grade 2 sprain and he is expected to miss the entire second-round series vs. Celtics, sources tell @TheAthletic @Stadium. The recovery of Grade 2 MCL places a potential Conference Finals in jeopardy for him as well.

Then, in Game 2, the forward closed out his outing with 18 points, five rebounds and eight assists. Khris Middleton sustained the injury with 6 minutes, 49 seconds left in the fourth quarter. After a quick examination, head coach Mike Budenholzer was anticipating news on a Grade 1 sprain. However, MRI tests today confirmed the severity of his injury.

Additionally, after the Bucks’ 114-109 loss to the Bulls in Game 2, teammate Jrue Holiday was asked about Middleton during the postgame press conference. “We just want him to get back as quickly as possible and be healthy so he can come out here and help us win games,” said Holiday.

Khris Middleton will be missed by the Bucks

Middleton’s impact on the court is undeniable. The South Carolina native also takes pressure off Giannis Antetokounmpo. It’s not to say that the Greek Freak underperforms during crunch time, but great players need help in close contests. Pat Connaughton is hot and cold from one game to the next.

In all seriousness, how will the team contain Jayson Tatum and Jaylen Brown without Khris Middleton? Not to mention, Marcus Smart amassed 20 points in Game 4 against the Nets. The C’s finished strong in the fourth quarter of each contest. So, Boston looked solid sweeping Brooklyn.

This unfortunate news for the Bucks now elevates the Celtics’ chances of winning this playoff series. Antetokounmpo will have to find a way to dominate in the second round. According to the schedule, Game 1 of the Eastern Conference Semifinals between the Bucks and Celtics begins at 1 p.m. ET on Sunday.

Check out other NBA news and betting picks on the main page of Basketball Insiders.