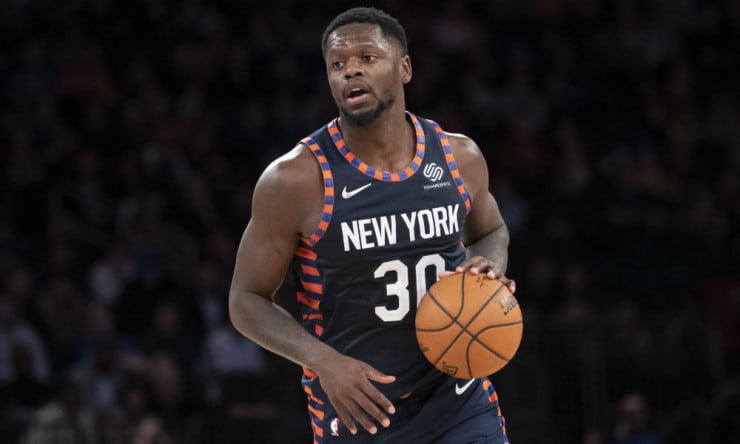 The Miami Heat are 6-7 to start the season and have been trying to find a replacement for PJ Tucker who signed with the Sixers in the offseason. Miami plays a combination of Jimmy Butler and Caleb Martin at PF and it hasn’t had much success. Martin is 6’5 and Butler is 6’7, not nearly tall enough with the team they have. Bam Adebayo is 6’9 and plays the center position for them. One name however, has been linked in trade rumors. It’s a PF from the Eastern Conference who could solve the Heats issue at PF.

Reports have come out that the Heat may be interested in Knicks PF, Julius Randle. New York has over $400 million invested in Randle, Jalen Brunson, RJ Barrett, and Mitchell Robinson. It’s a lot of money the Knicks owe just these four players and making a trade with one of them, specifically Julius Randle, may not be a horrible decision.

“Miami is probably the big team that will be looking for a power forward and he would at least be interesting there with Bam and Jimmy Butler.”

Miami Heat could be interested in PF Julius Randle

Knicks PF Julius Randle is in the first year of a $117 million four-year deal. It wouldn’t be incredibly easy to get the Heat to take over that large contract the Knicks owe Randle, but if their serious about being a playoff contender, they’d at least consider it.

“Miami is probably the big team that will be looking for a power forward and he would at least be interesting there with Bam (Adebayo) and Jimmy Butler. They’d have to make up for him on the defensive end, but they are good at scheming that way and they’ve been really bad on the offensive end. The Knicks would have to take back (Duncan) Robinson and a couple of their young guys like (Omer) Yurtseven and (Nikola Jovic), something like that. ” – Sean Deveney via Heavy Sports

Randle fits the “Heat culture” that Miami is looking for. He plays tough and a physical basketball whenever he’s on the court. Heat GM Pat Riley will make the call if Miami is seriously interested in Randle.