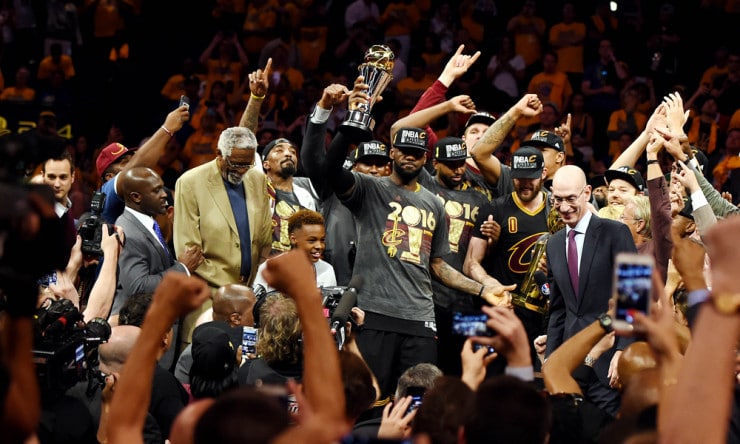 The era of the narrative might be dying in some NBA circles.

The information age has changed the game, the analytics revolution ushering in a precision and scientific feel in place of raw swings of emotion. Everything can be quantified now. There’s less space for platitudes like momentum, grit and emotion.

For a night, for a moment, forget about all that.

Nothing about these Finals felt calculable over the last three games, least of all Sunday’s breathtaking finale. Draymond Green’s fiery start, and overall masterpiece of a game as he searched for redemption; Kevin Love’s game-high plus-19 on the floor, deserved, and punctuated by a perfect defensive possession on Steph Curry down the stretch; Kyrie Irving’s ludicrous shot-making, back just in time to sink a juggernaut.

This all comes back to one man, though. A self-given nickname of “Chosen One” is a near certainty to deliver disappointment. Somehow, it may not have been the most unlikely thing LeBron James just accomplished.

There’s science to it for those so inclined, of course. There’s the 30-11-9 average on high efficiency, and there’s his defensive impact – the largest of any individual in the series. There’s another triple-double in a closeout game and the significance not only of their 3-1 comeback, but of defeating the team that would have ranked as history’s best otherwise. There are numerous contributions across the board from a sometimes maligned supporting cast with just enough juice to get it done, from Tristan Thompson’s endless motor to Irving’s brilliance to Richard Jefferson (Richard Jefferson!) sailing a steady ship to an impactful Finals at 35 years old.

But even those figures just don’t feel big enough. They don’t capture how LeBron’s departure and return have shaped his narrative, shaped a tormented city, shaped a league, even. They certainly can’t summarize the awe of these last three games, a level of basketball matched by no one else in the game’s history.

The city of Cleveland celebrates Sunday night, as should the sports fan who tuned in hoping for a glimpse of true greatness, a fleeting view of something so magnificent. We will never watch another athlete stun us quite this way. James and this team have reached the land he promised.

There will be time to dissect, time to assess the picture as another NBA year rolls over. For now, do what the guys in that Cleveland locker room are doing: Soak it in. Enjoy sport at its pinnacle. Take in the Cleveland Cavaliers’ NBA championship, LeBron James’ crown jewel.