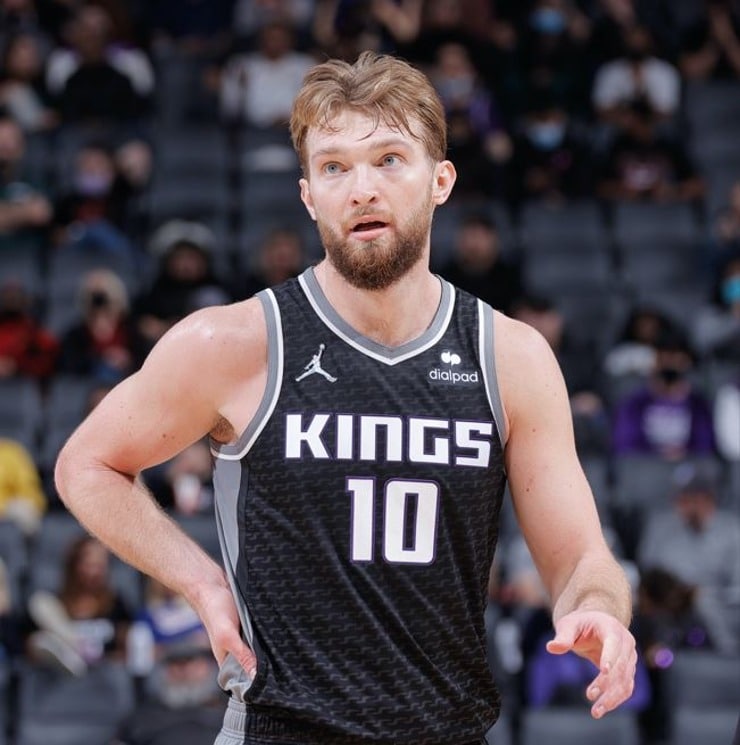 “Once I saw him catch it with his back to the basket, I didn’t worry because he has to catch it and turn around,” said the Kings star. “I was like, ‘Whatever.’ But then you know… we’re the Kings and I was like, ‘Well, we might have lost.'”

Based on a number of NBA betting sites, Domantas Sabonis and the Kings possess the 18th-best odds to win the championship. Check out which sportsbooks are expecting Sacramento to end its 16-year playoff drought this season.

Domantas Sabonis on the last play with Lauri Markkanen: "Once I saw him catch it with his back to the basket, I didn't worry because he has to catch it and turn around. I was like, 'Whatever'. But then you know… we're the Kings and I was like… Well, we might have lost."

“My main job was to get Fox open,” Domantas Sabonis said about De’Aaron Fox’s game-winning layup. “He’s so fast and you saw it on that layup for the game winner.” Fox led the Kings in scoring with 37 points.

Sabonis contributed 21 points, 14 rebounds, and eight assists in 39 minutes of action. He finished 8-of-13 (61.5%) shooting from the floor and a perfect 5-of-5 (100%) at the foul line. The two-time All-Star has logged 27 double-doubles and three triple-doubles so far this season.

Although Utah fell short, Lauri Markkanen’s shot was still incredible. His long-range jumper would have won the game for the Jazz had it been made half a second prior to the buzzer.

Furthermore, the NBA Most Improved Player of the Year candidate ended his outing with 28 points, eight rebounds, and one assist in 37 minutes played.

“I thought I had it off in time,” Markkanen said. “Right from the moment it left my hand, it felt good. It’s tough. Obviously, everyone remembers the ending, but there’s a lot of things that we did early; we fix and win this ball game.” Needless to say, Domantas Sabonis is glad that his shot was late.

The ending of the Kings-Jazz game was wild 😳

Lauri Markkanen was .1 seconds away from an epic game-tying shot at the buzzer. pic.twitter.com/hlL93z1MRA

Markkanen is a top candidate to win MIP this season, and perhaps Domantas Sabonis should be on the list as well. Through 35 starts, the seventh-year player is averaging 18.7 points and a career-high 12.4 rebounds per game.

To add to these statistics, the 26-year-old is logging 6.7 assists per game while shooting a career-best 62.5% from the floor and 41.9% beyond the arc.

In early December, Sabonis became only the fourth player in Kings franchise history to record at least 20 points, five boards, and five assists on 90% shooting from the field. He joined Harrison Barnes, Richaun Holmes, and Brad Miller.