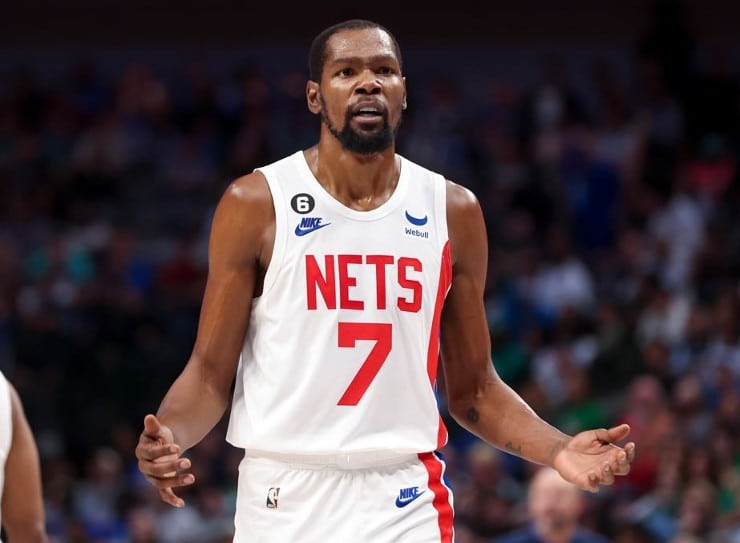 The Brooklyn Nets fired Steve Nash earlier this month and suspended Kyrie Irving at least five games for promoting anti-Semitism, and it now might be time to consider trading Kevin Durant, per ESPN’s Brian Windhorst.

“This is just something that league executives are talking about and, frankly, the Nets’ front office has to seriously start considering,” said Windhorst.

“And that would be a potentially nuclear option of beginning a blow-up to this roster this season.”

According to a few NBA betting sites, the Nets possess the sixth-best odds to win the championship in 2023. Find out which sportsbooks are showing higher odds for the Milwaukee Bucks, Boston Celtics, and Cleveland Cavaliers.

Kevin Durant has informed the Nets he plans to request to be traded. pic.twitter.com/9JFYWIB6wg

“They owe the next four drafts, essentially, to the Houston Rockets.” continued Brian Windhorst. “A pic swap this year, [Brooklyn’s] pick unprotected next year, another pick swap in two years, and in three years, their pick. But of those four, this year is interesting.”

Through 12 games this season, the Nets are 5-7 and rank 10th overall in the Eastern Conference. Nash was fired after a 2-5 start. On Wednesday, Brooklyn won its first game under coach Jacque Vaughn.

Prior to the season, sportsbooks gave the Nets a projected win total of 50.5 wins. Though, similar to last season, Brooklyn is disappointing quite a few bettors. Durant continues to carry this team.

“If this Nets team is not going to rebound, if Kyrie Irving isn’t able to satisfy the Nets and bring him back, if Ben Simmons’ knee and returning from his back issue is too big of a hurdle for him to be an impact player, maybe they need to look at what would happen if they took advantage of the pick swap this year, because the Houston Rockets are one of the league’s worst teams,” continued Brian Windhorst.

"[Kevin] Durant's price is so high that nobody can afford to pay it… Right now, everybody waiting for the price to get lower.” pic.twitter.com/br7QNZq7St

In eight appearances this season, Simmons is averaging career lows of 5.6 points, 6.4 boards, 6.3 assists, and 1.3 steals. Not to mention, he’s logging a career-worst 2.4 field goals per game.

However, the Nets will likely give it another month. Because the front office promoted assistant coach Vaughn to head coach, G.M. Sean Marks might wait to see whether the team can bounce back under new leadership.

Of course, the Nets had multiple opportunities to trade Kevin Durant and Kyrie Irving during the offseason, but the front office turned away teams. Durant’s trade value remains high. Meanwhile, Irving’s worth is at an all-time low.

The Nets trading the 12-time All-Star is inevitable. It’s a matter of when, not if. Brooklyn has lacked team chemistry right from the get-go. So, ESPN’s Brian Windhorst might be on to something.