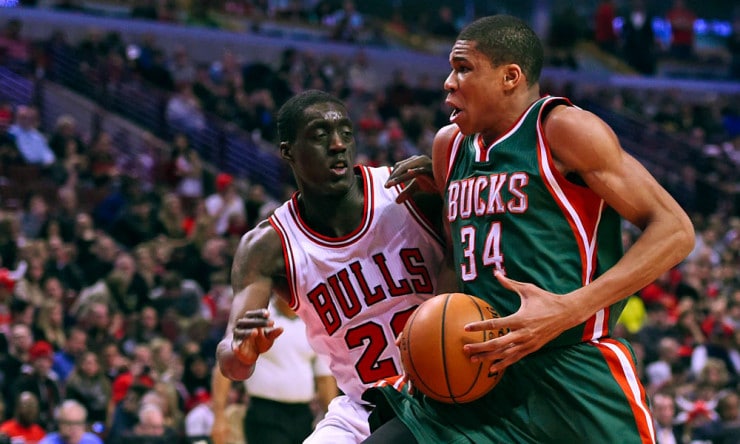 Amazingly, the Chicago Bulls and Milwaukee Bucks have only played against each other in the playoffs three times, and while the Bucks are 8-4 against Chicago all-time in the postseason, it has been 25 years since they last met outside of the confines of the regular season. There’s no question that the first game of this year’s matchup leans heavily in the Bulls’ favor, as Chicago won three of their four appearances against Milwaukee this season, and before losing to the Bucks on April 1 had previously won their last six against them. Chicago ends the season on a four-game winning streak that should usher them nicely into the postseason. They’ve got both the appropriate experience and momentum to jump out to an early lead in this series.

From a matchup standpoint, having Derrick Rose back helps Chicago, but truthfully he’s not the key player in this series. Chicago’s experience in the frontcourt, led by Joakim Noah and Pau Gasol and supplemented by Taj Gibson, is stronger than any combination of big men that Milwaukee can trot out, even with reasonably successful seasons under the belts of Ersan Ilyasova and Zaza Pachulia. On January 10, for example, Gasol scored a career-high 46 points against Milwaukee, and on February 23 the Bulls hauled in a season-high 62 rebounds against them, so the reality here is that Chicago is much, much better than Milwaukee down low. Knowing that, Rose, Jimmy Butler and Nikola Mirotic should be more than enough to equalize the effectiveness of Michael Carter-Williams, Khris Middleton and Giannis Antetokounmpo in Game 1.

Even without Jabari Parker, the Bucks have far exceeded expectations this season. The problem, however, is that they made the controversial decision to trade Brandon Knight at the deadline, despite the fact that he was pretty clearly their best player at that point, and they have gone 10-18 since the deal. Generally speaking, the Bucks’ turnaround this year has been heartwarming, but Milwaukee is only a .500 team a year removed from having the worst overall record in basketball. With very little playoff experience (their top three players are under 24 years old and have never appeared in a postseason game), it seems all but certain that they will face some serious Game 1 jitters, especially in the building that boasts the league’s highest attendance numbers.

With all that said, it’s not all doom and gloom for this upstart Bucks squad, which could give Chicago more of a run for their money in Game 1 than many expect. Carter-Williams has come on strong in April, averaging over 18 points and six assists in the league’s final couple of weeks. Head coach Jason Kidd has done a good job acclimating the team’s new point guard in just a couple of short months, and there’s no questioning the fact that the 6’11 Antetokounmpo is a matchup nightmare for whomever ends up guarding him at the three.

The Bucks are long and young and hungry, but it seems reasonable to expect some Game 1 nerves as a rite of passage for this talented up-and-coming team. It will prove challenging for them to grab their first win of the series on the road in such hostile territory.

Expect Chicago to take Game 1 at home. The United Center crowd is, without exception, incredibly lively for the first game of the playoffs. Homecourt advantage, frontcourt dominance and loads more playoff experience make them the favorite to jump out to a 1-0 lead in this series.