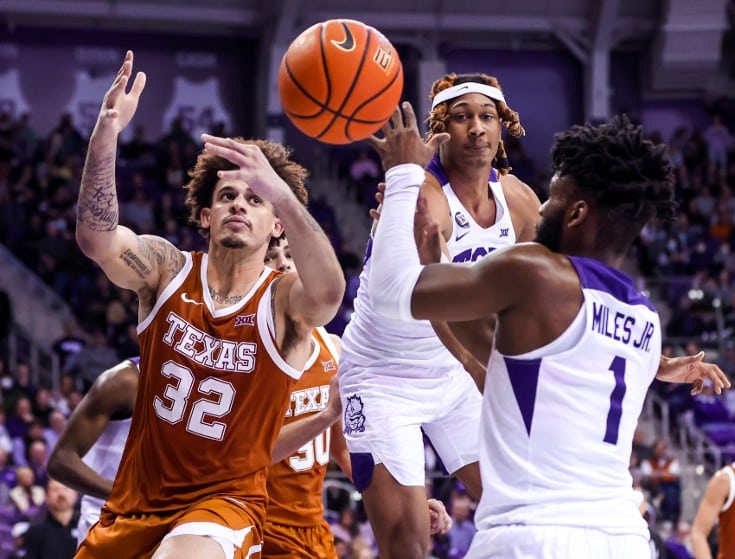 Can the Horned Frogs obtain their first win against the Longhorns since Mar. 9, 2019? Guards Damion Baugh and Mike Miles will have to elevate their performances. Along with the starting lineups, our top NCAA picks and betting trends are featured below.

Furthermore, in the TCU Horned Frogs’ 77-67 home win versus the West Virginia Mountaineers on Monday, forward Emanuel Miller put up 18 points in 34 minutes spent on the court. Guard Mike Miles ended his performance with 15 points, 4.0 rebounds and 5.0 assists in 35 minutes played. Overall, the Horned Frogs outrebounded them 42 to 24.

To add to the information above, the Horned Frogs have won five of their last 10 contests. Their 10-point win over the Mountaineers snapped their three-game losing streak. TCU is playing decent at home this season, and the team is keeping each game close on the road. They are 4-3 away, 10-4 at home and 6-1 ATS on the road.

As for the No. 20 Texas Longhorns, last Saturday, in their 61-55 home loss against the No. 9 Texas Tech Red Raiders, guard Andrew Jones led his team in scoring with 20 points earned in 36 minutes played. Guard Courtney Ramey accumulated 9.0 points, 4.0 rebounds and 3.0 assists in 37 minutes on the court, too. In a losing effort, the Longhorns shot 8-for-26 (30.8%) from three-point range.

According to ESPN’s Basketball Power Index, the Longhorns have a 84.7% chance of winning.

Moreover, Texas has won six of its past 10 games, though, the team is inconsistent and unpredictable. They won three straight games in January — defeating the Cowboys, Volunteers and Horned Frogs — but the Longhorns have failed to develop a solid rhythm. Now, the team is 15-2 at home, 3-6 away and 9-8 ATS at home.

Heading into this highly-anticipated Big 12 rematch, the Longhorns are 8.5-point favorites at home. TCU has not defeated Texas since 2019, and their losing steak against them will likely expand after tonight’s contest.

Taking everything into account, pick the Longhorns to win, the Horned Frogs will cover the spread and the total will go over 126.5. If you have never placed a bet, feel free to check out our handicap betting guide. Other NCAA picks are on the main page.