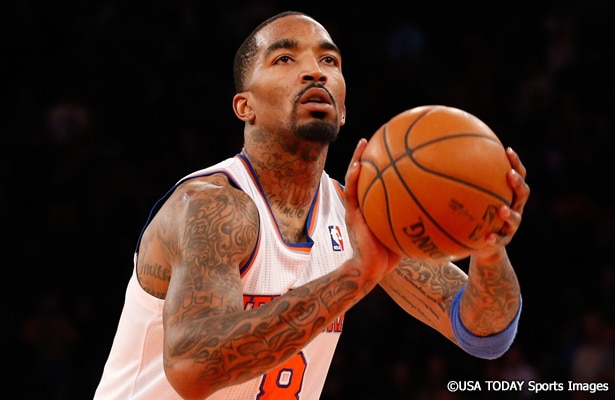 There hasn’t been much for Knicks fans to cheer about this season. Currently riding another three-game losing streak, New York has slid an embarrassing 11 games under .500.

Carmelo Anthony is playing at an incredibly high level on the offensive end, but other than Anthony’s exploits, there are been very few positives.

And over the first few months of the season, one of the biggest net negatives was the shockingly terrible play of J.R. Smith.

This was particularly surprising considering just nine months ago, as the Knicks were steamrolling towards their 54th win and their first Atlantic Division crown in nearly 20 years, Smith was putting the finishing touches on the best season of his career.

Smith had played well over the first half of last season, but stepped his game up to a previously unprecedented level after the All-Star Break.

Smith was particularly efficient, the result of a relentless aggressiveness attacking the basket, over a 10 game stretch last March. Smith attempted 89 free-throws during those 10 games, which tied Kevin Durant for most in the NBA over that time span. In March of 2013, Smith was one of just five NBA players who knocked down at least 20 three-pointers as well as 80 free throws. The other four members of that exclusive club: LeBron James, Kobe Bryant, James Harden and Kevin Durant.

Then, over the final six weeks of the 2012-13 regular season, Smith somehow managed to play even better. From March 20th through April 12th, a span of 14 games, Smith averaged 24.4 ppg and 6.4 rebounds, while shooting a scorching 51% from the floor. The Knicks won 13 of those 14 games. His performance down the homestretch of the season helped him secure the NBA’s Sixth Man of the Year Award. He finished the season as one of just six NBA players to average at least 17 points, five rebounds and 1.3 steals (Russell Westbrook, LeBron James, Rudy Gay, Kobe Bryant, and Kevin Durant were the other five).

Then, just as quickly as Smith’s stock skyrocketed, it bottomed out. The 2013 postseason began with such high hopes for the Knicks and their surging shooting guard. However, the year came to a bitter and abrupt end for both the player and the team. Just how historically awful was Smith’s 2013 postseason? Well, he became just the second player in the last 50 years to appear in at least 10 playoff games and average over 30 minutes per game, yet shoot below 34% from the floor.

Nonetheless, the Knicks brass re-signed Smith to a lucrative three-year contract, obviously hoping they had inked a deal with the Smith that had sparked their terrific regular season run, as opposed to the J.R. Smith that flamed out in the playoffs.

However, shortly after he agreed to his new deal, it was announced Smith needed knee surgery. Later it the summer, word leaked that the league had suspended Smith for the first five games of the season for violating the NBA’s drug policy.

Upon finally returning to the Knicks lineup six games into the 2013-14 regular season, Smith has played worse than anybody could have imagined.

Through the first 29 games of the season, Smith was shooting just 34% from the floor and a below 63% from the free-throw stripe. He averaged just 11.3 points per game, despite attempting 12 field goals per contest.

As if his on-court performance wasn’t damaging enough, Smith was also generating drama and causing headaches off the floor, primarily related to shenanigans on Twitter or Instagram.

Everything came to a head about a month ago, when Smith was fined $50,000 for trying to undo the shoelaces of two opponents and was benched the following day against the Miami Heat on January 9th. Smith was then benched against Charlotte after reportedly exchanging words with Woodson and arriving late for a meeting.

Since that time, we’ve seen the rebirth of the Smith that starred for the Knicks in the second half of last season.

The difference in his numbers has been staggering. As noted above, he was averaging just 11.3 ppg on 34% shooting through January 8th. Since then, he is averaging over 17 points per game and shooting nearly 48% from the floor.

Smith’s willingness to settle for long-jumpers, as opposed to attacking the basket and getting to the free-throw stripe was arguably the primary reason for his drastic decrease in efficacy over the first three months of the season.

Since his return from the suspension, Smith has been far more aggressive. He attempted 44 free-throws over the Knicks first 29 games this season (pre-suspension). In the 13 games he’s played since then, he’s attempted 46 free-throws. Unsurprisingly, his three-point attempts have correspondingly decreased, while his three-point percentage has increased.

In addition, not only is he far more efficient and effective individually when he consistently attacks the tin, he greatly improves his team’s overall offensive production. When he is slashing into the paint and drawing defenders, he consistently sets up his teammates for lay-ups, dunks or open jumpers.

Also clearly noticeable since his return from suspension has been Smith’s lack of in-game theatrics. There have been far fewer “air guitar” gestures and big dances after baskets. He’s simply running back down to the defensive end of the floor without drawing attention to himself. He has also been far less active on social media, tweeting far less frequently.

The most frustrating part of watching Smith play is that he clearly has the ability to be a special player in the league. The numbers speak for themselves. The fact that his production can fluctuate so wildly is what has driven his fans and his coaches crazy.

Unsurprisingly, there historically has been a direct correlation between the Knicks’ record and Smith’s struggles.

Smith is a true “X-factor” for New York. When he is efficient and effective on the offensive end, it is often a fantastic barometer for his team’s success. Consider this: Since signing with New York in 2012, the Knicks are an incredible 37-8 (.822 winning percentage) in the 45 games in which Smith has shot 50 percent or better from the field.

Can Smith carry this style of play into the final stretch of the season, or will he revert to his old habit of settling for ill-advised jumpers? Can he stay out of trouble off the court?

The Knicks have $18 million dollars invested in Smith, so they are clearly hoping Smith can answer these questions affirmatively. If he can, they have a chance of trading him (and his onerous contract) before the he reverts back to forcing contested fadeaways and sending out inappropriate tweets.