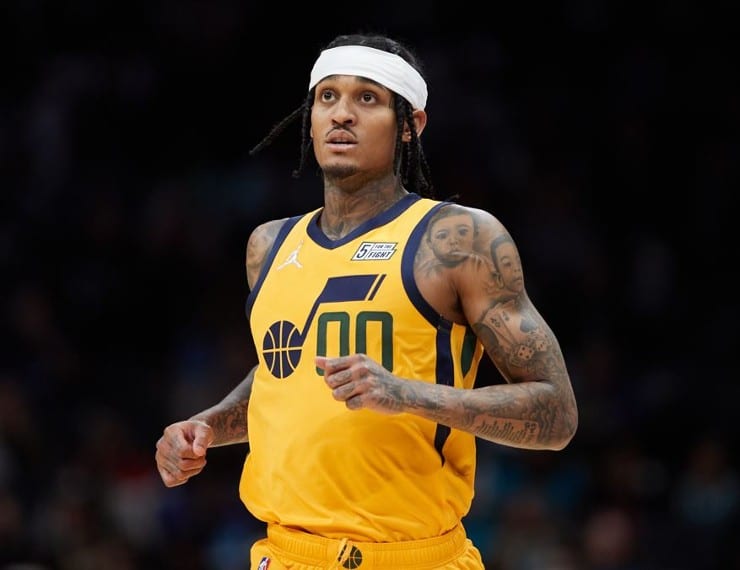 Utah Jazz guard Jordan Clarkson is still on positive terms with former teammate Donovan Mitchell, who was traded to the Cleveland Cavaliers for Ochai Agbaji, Lauri Markkanen, Collin Sexton, and five first-rounders back in September.

“Donny is coming. That’s my guy man, always,” Clarkson told Marc J. Spears during an interview with Andscape. “Always show love to him. We talked a lot. He is a cool and down-to-earth kid and he’s really starting to embrace that. He’s a real, real superstar, honestly.”

According to a few NBA betting sites, the Jazz possess the eighth-lowest odds to win the championship. Check out which sportsbooks are giving the Minnesota Timberwolves and Portland Trail Blazers better odds to make the playoffs.

Jordan Clarkson is ready for the return of Donovan Mitchell tonight. ‘He's a real, real superstar.’ The #Jazz guard also talks about his Filipino and Black heritage, dating a pop punk star, Kobe, his unique hair, tattoos and nails and more in @andscape. https://t.co/faNBW4IGGO

“Seeing him go through all that so young is really crazy to me,” added Jordan Clarkson. “I never had that experience. I saw Kobe and LeBron, and them when they were older and understood a lot of things. And Donny’s kind of understanding it and really coming into his own as a man.”

Mitchell seems like a pretty cool teammate. In his sixth NBA season, the Cavaliers guard is averaging career highs of 28.8 points and 36.5 minutes per game through 36 starts. Not to mention, the three-time All-Star is posting 3.9 boards, 4.8 assists, and 1.4 steals per contest.

In Cleveland’s 145-134 win over the Chicago Bulls on Jan. 2, the former Jazz guard scored a career-high 71 points on 22-of-34 (64.7%) shooting from the field and off seven 3-pointers. Mitchell scored or assisted on 99 points in this game, the second-most in NBA history since Wilt Chamberlain’s 100-point performance.

Of course, Jordan Clarkson is dominating as well. Through 42 starts this season, the nine-year veteran is averaging career highs of 20.4 points, 4.5 assists, and 32.5 minutes. Along with logging 3.8 rebounds per game, Clarkson is shooting 44.8% from the floor and 35.6% outside the arc.

NBA Media Survey for best players at each position:

In the 2014 NBA Draft, Clarkson was selected 46th overall by the Washington Wizards. He was then traded to the Los Angeles Lakers. Despite playing for notable contenders, the 30-year-old has never received an All-Star selection in his career.

Moreover, Spears then asked the Jazz guard whether or not he has his sights set on earning his first All-Star appearance in his home arena. “I’m playing to that caliber, making plays, trying to help my team win,” responded Jordan Clarkson. “I ain’t never been one to chase awards and accolades or nothing. I just kind of let the game speak for itself.”

For Monday night’s interconference matchup, the Cavaliers are 3.5-point favorites over Utah. Per ESPN’s Basketball Power Index, Cleveland has a 57.9% chance of winning at Vivint Arena.