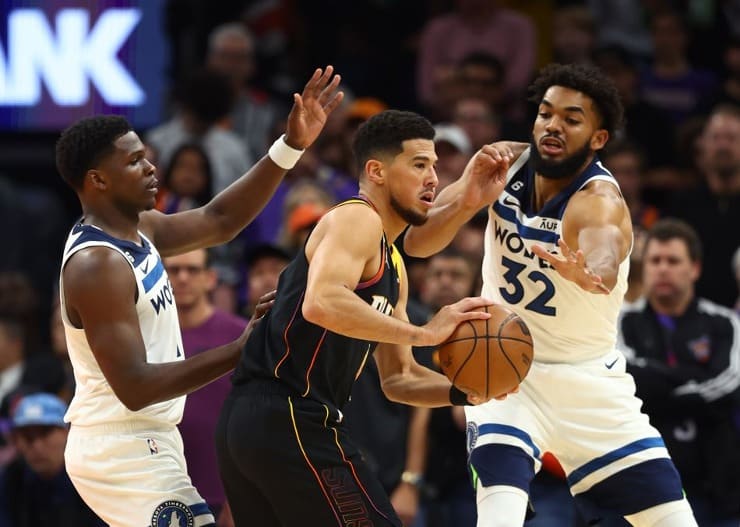 Timberwolves center Karl-Anthony Towns was asked how he could bring the joy back out of Anthony Edwards’ game, following Minnesota’s 129-117 loss to the Phoenix Suns on Wednesday night.

“I would say something, but then I’m gonna go back on Twitter,” said Towns on Edwards. “So, I ain’t gonna say s—t. What we could do is bring some soul food in this, but it ain’t gonna work.”

Some NBA betting sites are giving the Timberwolves the 16th-best odds to win the championship in 2023. Check out which sportsbooks are showing higher odds for the New Orleans Pelicans.

Asked Karl-Anthony Towns in the locker about how he might be able to bring the joy back out of Anthony Edwards' game.

Ant comes up to the scrum and say, "yeah, how do you bring it out, Karl?"

They laughed, but then I thought Karl's answer was actually pretty interesting… pic.twitter.com/q3M6nohyhP

“Nah on some real s—t, with Ant right here, I remember when I came out,” continued Karl-Anthony Towns. “I was very joyful, jolly, I was everywhere smiling. That was like my MO here. You get older…

In the minds of many Timberwolves fans, Towns should have said something about winning. Of course, the drive to win should bring the joy out of any professional athlete. It was a response that quite a few fans hoped to hear.

Through 12 games this season, the Timberwolves are 5-7 and rank 10th in the Western Conference standings. Minnesota, the San Antonio Spurs, and Sacramento Kings trail the top-seeded Utah Jazz by 4.5 games.

“Remind him about my experiences, tap into my wisdom of those moments when things are really good and really bad,” continued Karl-Anthony Towns.

“Just let him know he was family, he has me. I’ll always be here to take a bullet for him.”

Moreover, in the Timberwolves’ loss to the Suns, Towns closed out his performance with 11 points, 8 rebounds, and 4 assists in 28 minutes of action. Edwards ended his outing with 11 points, 3 boards, and 6 assists in 35 minutes as well.

Statistically, Karl-Anthony Towns is underperforming this season. The three-time All-Star is averaging 21.3 points and career lows of 8.9 rebounds and 0.7 blocks per game.

Meanwhile, Edwards is generating the same stat lines he did last season. Through 12 starts, the third-year guard is averaging 21.3 points, 5.5 rebounds, 3.8 assists, and 1.3 steals.

While Anthony Edwards is playing well so far this season, the Timberwolves’ backcourt is inconsistent. That’s the bottom line. Minnesota has two of the best rebounders and defenders in the game, but the team still lacks defense.

The Timberwolves rank 11th in points per game (114). They also rank 9th in the league in team shooting percentage (47.5%). Nonetheless, the team is allowing 115.8 points per game, ranking 23rd in the NBA.

Karl-Anthony Towns has to play better as well.