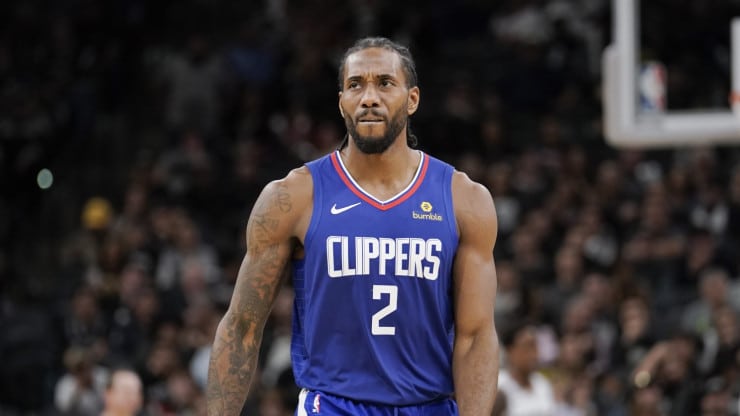 Yesterday, news surfaced on social media concerning Kawhi Leonard opting out of his contract with the Los Angeles Clippers and becoming an unrestricted free agent. Now, he could re-sign with the Clippers if general manager Michael Winger offers a larger contract, but Leonard is looking at offers from other teams. According to oddsmakers at BetOnline, there are eight potential teams he could sign to play for. These select teams are: New York Knicks, Dallas Mavericks, Golden State Warriors, Phoenix Suns, Toronto Raptors, Charlotte Hornets, Philadelphia 76ers and Washington Wizards.

Odds on Kawhi's team at the start of the regular season if he leaves the Clippers:

With +200 odds, the New York Knicks have the best odds of signing Leonard this offseason. Yesterday evening, the team re-signed point guard Derrick Rose, center Nerlens Noel and guard Alec Burks. Rose will sign a three-year, $43 million contract, while Burks agreed to a three-year $30 million deal. Plus, Noel signed a three-year, $32 million contract as well, and New York also signed Evan Fournier from the Boston Celtics. Despite these significant offseason moves, Leonard is an available option for general manager Scott Perry. Rose and Julius Randle would help compliment Leonard’s style of play. Per Spotrac, the team’s practical cap space is $44,017,950.

Moreover, the Mavericks have the second-best odds (+250) of landing Leonard. Their practical cap space is currently $33,554,217. Forward Dwight Powell’s contract expires after the 2022-23 season. Though, he is set to earn $11 million next season. Two-time All-Star and two-time All-NBA First Team guard Luka Doncic signed a multiyear contract with Dallas on July 9, 2018. He is set to earn $10,174,391 next season.

Their highest paid player, center/power forward Kristaps Porzingis, has a cap figure of $31,650,600. New Mavs general manager Nico Harrison can make a trade or two in the coming months to help clear up cap space for Kawhi, if owner Mark Cuban is interested in acquiring the player. The Clippers would prefer a sign-and-trade option.

Furthermore, the Golden State Warriors have the third-best odds (+300) at the top of the list. Contrary to what the odds show, Leonard signing with the Warriors would be quite the shocker. Then again, what if general manager Bob Myers decides to sign Kawhi only to trade him months later during the 2021-22 season? This happens a lot in the NBA. In addition to pursuing top-level talent during free agency, Golden State fans have to show concern for the salary cap.

Point guard Stephen Curry has a cap figure of $45,780,966, the highest on the team. Shooting guard Klay Thompson also has a cap figure of $37,980,720. Due to his past few seasons of sustaining major injuries, the possibility of Thompson tearing his ACL again has to be a thought in the back of everyone’s mind. Additionally, the Warriors have not made the playoffs since the 2018-19 season. Kawhi is interested in joining a dependable contender.

If GM Bob Myers refuses to offer a large sum to Leonard, needless to say, it is doubtful he will choose to sign with the Warriors. Regarding the high contract demands, the same can be said about the Mavericks and Knicks. Reports from different news sites suggested that Kawhi was frustrated with the Clippers’ medical staff. This latest news would explain why he might be searching for offers from other teams right now. Not to mention, during the Clippers-Jazz matchup of the second-round series of the playoffs, Leonard suffered a partial right ACL tear. Fortunately, this will not ward off interested teams who want to sign the player. He is a valuable asset. To add to this, there is no timetable for his return from injury.