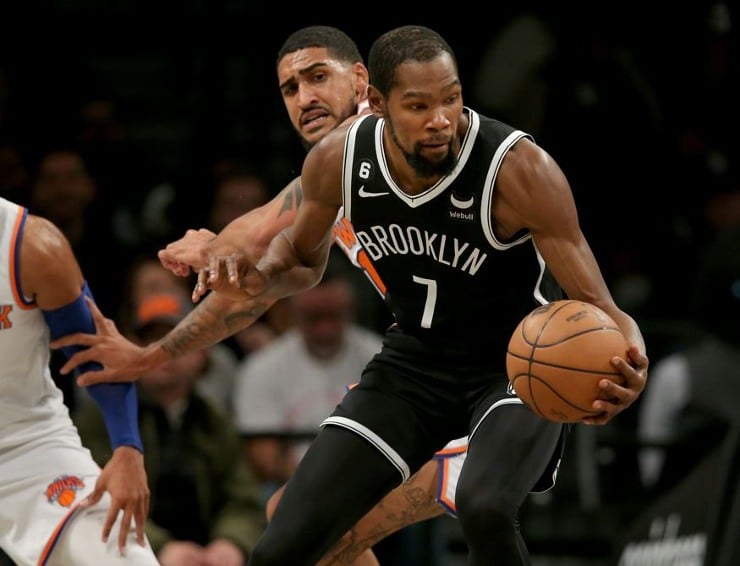 “Really just don’t be a crybaby,” the two-time Finals MVP said that Black Mamba told him years ago. “I was at that age at 23 where I thought the world revolved around me…”

Based on a few NBA betting sites, Kevin Durant has the seventh-best odds to win MVP in 2023. Check out which sportsbooks show better odds for Jayson Tatum, Luka Doncic, and Giannis Antetokounmpo.

Kevin Durant was asked what he learned the most from Kobe Bryant:

"Don't be a crybaby. I was at that age at 23 where I thought the world revolved around me and he was real humble in how he approached the game, how he approached his teammates, just life in general" pic.twitter.com/YiKFESGlgq

“So I learned just from watching his movements. He was an example, he didn’t say much but he was an example just by how he moved, and I try to emulate, like I said, him and Mike [Michael Jordan] are two dudes I emulate on and off the court what they do, and I know it will make me better.”

While the 12-time All-Star strives to be more like Kobe and Jordan, the Nets forward still needs to win more MVPs and championships. Bryant retired with five rings, four MVPs, and two Finals MVPs over the course of a 20-year career. Therefore, he’s not far off from catching Kobe.

On the other hand, Jordan won six championships with the Chicago Bulls, along with six Finals MVPs, five MVPs, one NBA Defensive Player of the Year (1988), and he received 20 All-NBA selections.

Durant’s mental make-up is quite different from Kobe and Jordan’s. An occasional outburst on the court is understandable, but Durant wastes no time to respond to Internet trolls on social media. It says a lot.

Though, while their NBA career résumés differ, their love for the game remains the same. One could argue that Kobe and Jordan wanted to win more than Kevin Durant, and not many fans would disagree with that assessment.

KD was asked about Kobe postgame:

“Basically I just try to copy everything he does.” pic.twitter.com/wRoNVmK6ME

Kobe and Michael Jordan won all of their championships on the NBA teams that drafted them. They stayed with their teams through thick and thin. Neither player decided to sign with a title contender after losing in the playoffs.

Moreover, there is at least one member of the NBA who believes Durant is similar to Kobe.

“He’s a lot like Kobe to me,” Hornets coach Steve Clifford about Durant to ESPN prior to Wednesday’s game. “Their makeup is different in many ways, but on the court, they’re very similar in terms of the way they work, and they’re both students of the game.”