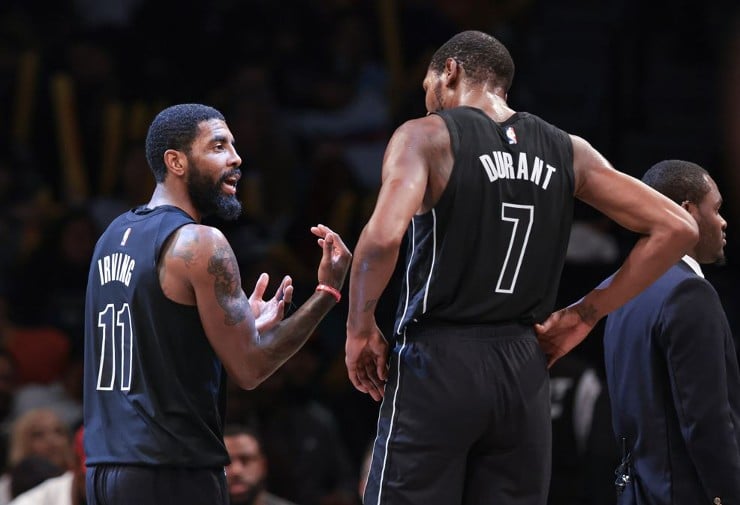 Kevin Durant believes the Brooklyn Nets could have handled Kyrie Irving’s anti-Semitism issue differently. Though, the two-time Finals MVP trusted the organization to do the right thing.

“I ain’t here to judge nobody or talk down on the life or how they feel with their views and things,” Durant told USA TODAY Sports.

Some NBA betting sites are giving the Nets the eighth-best odds to win the championship in 2023. Sportsbooks now show the Philadelphia 76ers with higher odds to win the title this season.

“I just didn’t like anything that went on,” continued Kevin Durant. “I felt like it was all unnecessary. I felt like we could have just kept playing basketball and kept quiet as an organization… I just don’t like none of it.”

On Thursday, the Nets suspended Irving for at least five games. Although he issued an apology on Instagram, the guard failed to apologize and denounce anti-Semitism in a timely manner.

Fans are also questioning whether the apology is sincere. Irving offered to donate $500,000 to the Anti-Defamation League (ADL). However, the organization refused his donation.

“We cannot in good conscience accept his donation,” said ADL CEO Jonathan Greenblatt. “We were optimistic, but after watching the debacle of a press conference, it’s clear that Kyrie feels no accountability for his actions.”

During the interview, when a reporter asked Kevin Durant if he felt the suspension was unfair, the forward replied, “I believe in trusting the organization and doing what’s right.

It’s an unfortunate situation for people impacted by the situation. I mean, this sucks all around for everybody. Hopefully, we can move past it.”

Kevin Durant then went on to say, “Everybody has an opinion on the situation, and we’re hearing it nonstop.” While the 12-time All-Star is correct, the Nets also owe it to their Jewish fans to address Irving’s actions.

Had the front office handed out a suspension and left it at that, the community would have thought the Nets weren’t taking the situation seriously.

After all, the NBA continues to preach equality and fight to end racism. Consistency is important for the league’s image.