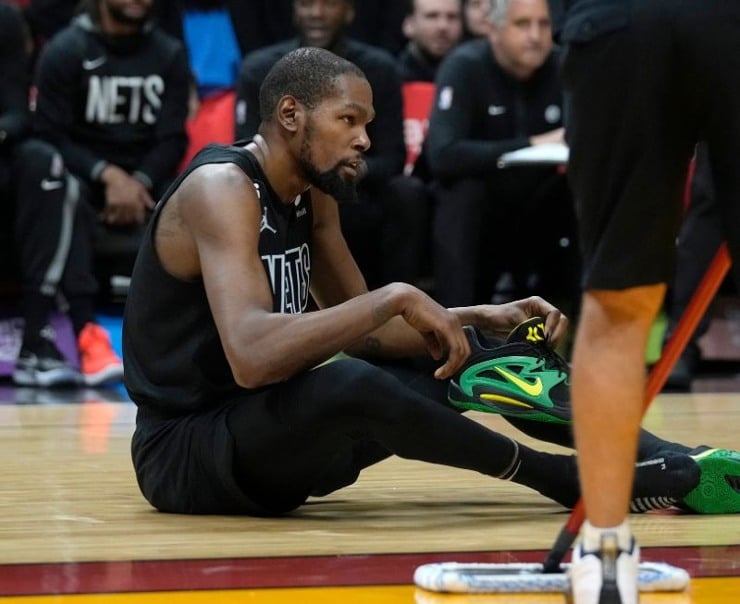 Brooklyn Nets superstar Kevin Durant will miss at least two weeks after being diagnosed with an isolated MCL sprain of his right knee. An MRI on Monday confirmed his knee sprain.

Durant sustained the injury during the third quarter of Brooklyn’s 102-101 win over the Miami Heat on Sunday night. At the 1:05 mark, after Ben Simmons blocked Jimmy Butler’s shot in the paint, Butler fell back into Durant’s right knee.

Kevin Durant has an MCL sprain and will be reevaluated in two weeks, but there are reasons for optimism with the Nets.@IanBegley with more on Durant's injury: https://t.co/IbP3KJf3z3 pic.twitter.com/SezFcwIDMm

Kevin Durant missed over six weeks after injuring his left MCL in the Nets’ 120-105 win against the New Orleans Pelicans on January 15, 2022. Brooklyn lost 11 straight games and went 5-16 during his absence last season.

In the Nets’ win loss to Miami, the forward ended his performance with 17 points, five boards, two assists, one steal, and one block in 31 minutes played. Kyrie Irving led Brooklyn in scoring with 29 points.

“Those plays are scary, because when someone’s not looking what’s going on, anything can happen in those moments,” Irving said. “So I’m grateful for all that time he’s put in the weight room putting his body in a great position, and his body was able to save him from something worse.”

Kevin Durant injured his knee when Jimmy Butler crashed into him

Of course, the Nets will play two games over the next six days. Then, the Nets will play six straight away games. In other words, Durant is projected to miss at least 10 games. They need him back as soon as possible. With the 34-year-old, Brooklyn went on a 12-game win streak under coach Jacque Vaughn. Needless to say, he is the team’s MVP.