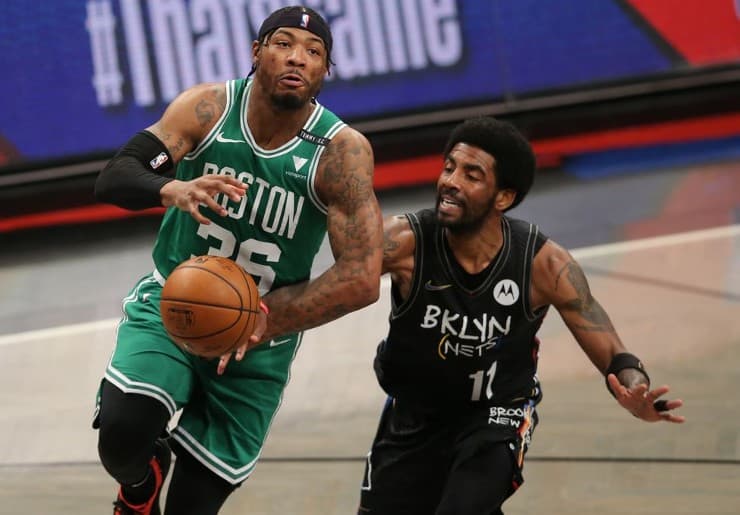 Brooklyn Nets guard Kyrie Irving feels his team will improve after getting swept by the Boston Celtics in the first round of the NBA playoffs last season.

As a guest on “The Boyz Night Podcast” with hosts KaiCenat, YourRage, and Bruce Ray, the seven-time All-Star believes the Nets can learn from their playoff struggles.

“Get ’em up. I’ve got to get them up on both ends of the floor. I’ve got to be a complete player,” Kyrie Irving told the hosts. “Coming for different hardware this year, bro. I’ve been in the lab crazy, since we got 4-0’d.”

Kyrie Irving on loss to Celtics: “We needed that humbling experience”

After refusing the COVID-19 vaccines, the guard was ineligible to participate in home games at Barclays Center. Although the 11-year veteran received clearance to play in home games in March, the Nets were still outmatched against Boston.

“So to see them doing what they did last year on the Finals stage, making it that far, I’m glad they had to go through us.”

If the Nets are aiming to return to the NBA Finals for the first time since 2003, they have to block out distractions this upcoming season.

With Kevin Durant, Patty Mills, Ben Simmons, and Kyrie Irving, the Nets are more than capable of winning the Eastern Conference. Though, it’s now all a matter of consistency and team chemistry. Fans are skeptical. Can Brooklyn win a championship with Durant and Irving?