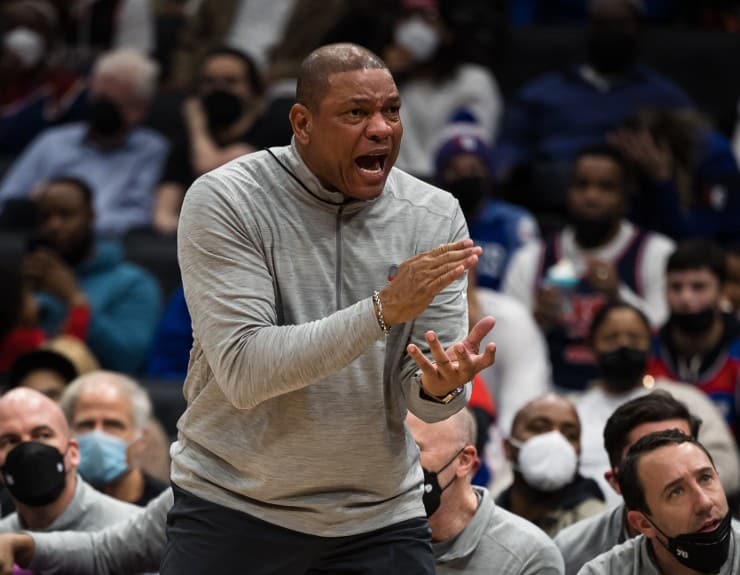 With the 2021-22 NBA regular season coming to a close, the latest rumor concerns the Lakers and Jazz pursuing 76ers’ head coach Doc Rivers. Although Rivers still has a job with the Sixers, could this be his final season with the organization? Expectations are high. Owners and general managers across the league are keeping their coaches on tighter leashes. Last November, the Kings fired Luke Walton.

According to Jake Fischer of Bleacher Report, the reporter stated, “The Lakers are still expected to part ways with embattled play-caller Frank Vogel. Doc Rivers, the Philadelphia 76ers’ head coach, is another active bench leader being mentioned by league personnel as a potential Lakers candidate.” Rivers has experience overcoming pressure in Los Angeles.

Before the NBA season began, the Lakers’ projected win total was set at 52 games. So, their season was definitely a disappointment. If the team fails to qualify for the play-in tournament, that will be the final nail in the coffin for head coach Frank Vogel. The decision could have already been made. This would be the second time the Lakers have missed the playoffs with LeBron.

When Rivers was head coach of the Clippers from 2013 to 2020, the team never made it beyond the Conference Semifinals. He might prefer Los Angeles over Utah. Or, maybe he likes Philadelphia over all of them. Not much is known right now. Maybe Rivers wants to continue coaching James Harden.

Not to mention, the Jazz were mentioned as a possible landing spot as well. “Rivers has also been linked by several league sources as a potential replacement for the Jazz, in the event Snyder does depart Utah,” Fischer elaborated. If Rivers became the next head coach of the Jazz, he would be reunited with former Celtics’ general manager Danny Ainge. On Dec. 15, 2021, the Jazz hired Ainge as alternate governor and CEO.

Of course, Rivers’ lone title as a head coach came against the Lakers in the 2008 NBA Finals. Boston finished 66-16 (.805) in the championship season. As coach of the Celtics, he had a stacked roster — e.g., Rajon Rondo, Paul Pierce, Kevin Garnett and Ray Allen. If Rivers had Anthony Davis, LeBron James, Russell Westbrook and a few other additions, maybe the Lakers could make it back.

Quinn Snyder could coach the Lakers

Moreover, another possibility is Jazz head coach Quinn Snyder becoming the next head coach of the Lakers. Snyder once served as an assistant with the Lakers. As a NBA head coach, Snyder’s record is 323-231 (.583). Both candidates make sense. From a neutral standpoint, Los Angeles is more appealing. Plus, coaches want job security.

Furthermore, Philadelphia currently ranks fourth overall in the Eastern Conference standings. The 76ers remain 2.5 games behind the top-seeded Heat. Unless the Sixers go out on top in the postseason, it’s doubtful that Rivers will be returning to Philadelphia next season. Never say never, though. Rivers’ career head coaching record is 992-774 (.585).