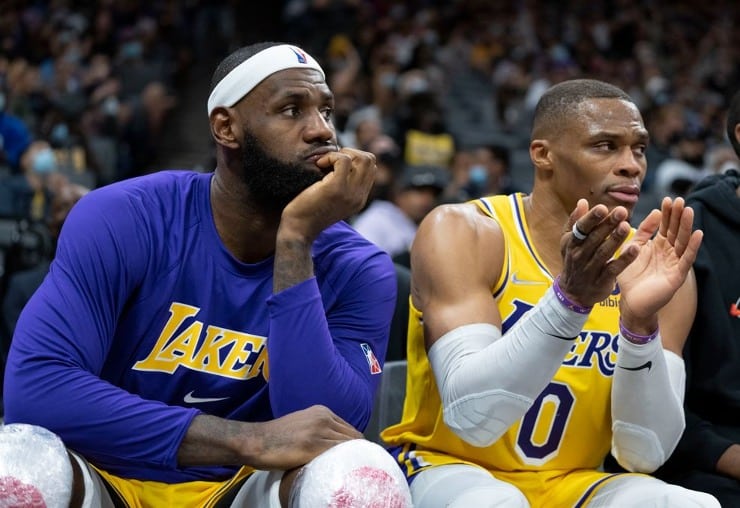 LeBron James and the Los Angeles Lakers are off to a shaky start to begin the 2022-23 season, and reporters are not holding back on criticizing Russell Westbrook for his awful shooting.

“I’m definitely not going to sit here and harp on what we can’t do every single game,” James said when reporters asked him about his teammates’ missed shots.

Per multiple NBA betting sites, the Lakers have top-1o odds to win the championship in 2023. But some sportsbooks are expecting them to miss the playoffs again this season.

LeBron James’ advice to Russell Westbrook after his 0/11 shooting night: “Flush it down the toilet.” pic.twitter.com/8Fv1lPZ0YA

“That’s not a leader. What I know we can do? We can defend our ass off. We did that tonight, which gave us an opportunity to win, and we just couldn’t make it happen. But I’m ok with that.”

James ended his performance with 20 points, 10 rebounds, and 6 assists in 37 minutes of action. Despite losing back-to-back games to open the 2022-23 season, the four-time NBA champ continues to add double-doubles to his career total.

Additionally, the Lakers played even worse on Thursday night than they did in their opening-day loss against the Golden State Warriors.

“If we’re reliant on [sufficient outside shooting] every single game, then we’re in trouble,” continued James. “So, I’m not worried about that or thinking about that.”

“It’s how hard we play, how aggressive we play, how determined we are to go out and compete every night. And we got to defend. When we defend, we’re going to give ourselves a good chance to win.”

They have made just 24 of their 101 jump shots this season.

In 27 minutes on the court, Russell Westbrook shot 0-of-11 from the field and 0-for-6 from beyond the arc. His only two points on Thursday night were earned while at the foul line.

“Everybody in this league has had bad shooting nights. Who cares? I thought he played a great game. Defensively he was in tune. He was locked in. He pushed the tempo. He just didn’t make any shots, and that’s ok.”

While defense can win the Lakers games, they also need consistent scorers. Even if LeBron James and Anthony Davis average double-digit points again this season, it will not be enough to win without a third superstar. Patrick Beverley finished 1-of-7 from the floor and Kendrick Nunn shot 0-of-11 overall.