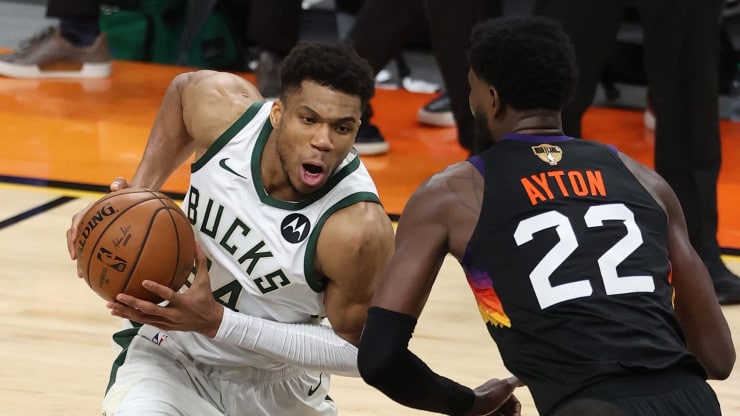 Tonight’s Game 6 of the 2021 NBA Finals begins at 9:00 p.m. (EST) on ABC, ESPN2, and ESPN Deportes. For live streaming the entire sixth game of the NBA Finals and checking out how the players match up in this elimination game for the Suns, the downloadable Locast, ABC, and ESPN apps are also available. Not to mention, the best NBA betting apps for 2021 are from BetUS, Bovada, Intertops, MyBookie, and BetOnline.

Referencing NBA betting odds provided via MyBookie, the Milwaukee Bucks are five-point favorites over the Phoenix Suns. The Bucks are also 9-2 at home in the playoffs this postseason. The Suns are aiming to push this series to a Game 7. If there is a Game 7, it will begin Thursday, July 22nd at 9:00 p.m. (EST).

Furthermore, the total for Game 6 is set at 222. The Suns are 55-36-2 ATS this season, while the Bucks are 45-49 ATS. The team total projection is listed at 113.5 (-115) a piece for the sixth game of this series. The Suns had not lost consecutive games this postseason until Game 4 against the Bucks. They are now on a three-game losing streak. For those of you who are new to sports betting, always remember the “-” refers to the favored team, while the “+” refers to the underdog.

The wager cutoff time for all contest game props for Game 6 is tonight at 9:05 p.m. (EST).

For injuries, keep in mind that Bucks’ small forward Thanasis Antetokounmpo, the older brother of Giannis, is listed as questionable to play. Before Game 5 began at the Phoenix Suns Arena, Thanasis was placed in the COVID-19 health and safety protocols. It is unknown at the moment if he will even be allowed to join his team members in the courtside seating area.

Having said this, the odds for both teams remain the same. Based on the available data, the Bucks are due for another loss at home. Though, Milwaukee is playing better basketball right now. The Suns have not made it this far since the 1992-93 season. There are fair arguments for either team. Since Game 1 of the Eastern Conference Finals against the Atlanta Hawks, played on June 23rd, the Bucks have not lost at the Fiserv Forum. Here are the contest game props odds from MyBookie:

According to the MyBookie Finals MVP odds, the Suns’ Chris Paul has +650 odds of winning the award, followed by Devin Booker at +700, the Bucks’ Giannis Antetokounmpo at -400, Khris Middleton at +2000, Jrue Holiday at +8000, and Deandre Ayton at +15000. However, Paul’s value is dropping fast. With a total of 18 turnovers, he is leading all other players in this metric. None of these players have ever won the Finals MVP. If the Bucks prevail in Game 6, needless to say, Antetokounmpo and Middleton have the best odds of winning the award.

Per Basketball-Reference, the Greek Freak is averaging 32.2 points, 13 total rebounds, and 5.6 assists in this finals series. Thus far, he has scored a total of 584 points and retrieved 255 total rebounds in this season’s playoffs, leading all other players. On the flip side, Middleton is averaging 25.4 points, 6.6 total rebounds, and 5.4 assists. The last Bucks player to win the Finals MVP was Kareem Abdul-Jabbar, and he won the MVP after sweeping the Baltimore Bullets in the 1971 NBA Finals.