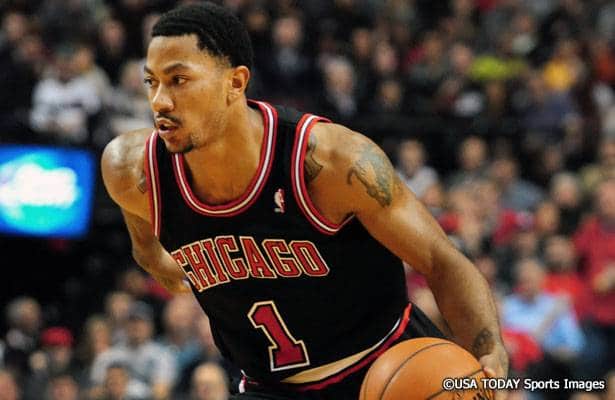 United stand or hints of friction in Chicago?

The Chicago Bulls have overachieved the past two seasons, primarily playing without former MVP Derrick Rose while the star rehabbed his surgically repaired knees. But despite the clear on the court story of perseverance through adversity, there has been more than enough rumors, off the hardwood, suggesting growing friction in the organization at a variety of levels over the last few years.

There have been countless rumors of friction between Bulls general manager Gar Forman and head coach Tom Thibodeau. On the flip side there has been frustration within Rose’s camp on the front office’s inability to surround the star with a strong enough supporting cast to compete for a title. Likewise, there have been countering reports suggesting the franchise’s front office is growing weary of the constant criticism stemming from Rose’s camp.

According to a Chicago Sun-Times report, Rose freely admits there has been friction with the franchise in the past but makes it clear he wants to improve the relationship moving forward.

“I know it’s been there,’’ Rose told Joe Cowley of the Chicago Sun-Times, seemingly acknowledging growing tension between the organization and his camp. “I heard there were some upset people.

“I’m happy I didn’t personally see it. I don’t want to see that. I kind of wonder where it was coming from because it seemed like whenever I was around, everything was all right. It bothered me because when I wasn’t around, I would hear from certain people that everything wasn’t all right.”

Rose has three-years and just over $60 million remaining on his current deal but has only played a combined 10 games the last two seasons, leaving many to question whether he can ever return to superstar form.

Bulls chairman Jerry Reinsdorf reacted swiftly to the Sun-Times’ report issuing a press release vehemently denying any friction within the organization – from the front office all the way to the players.

“I am confounded by the irresponsible report in the Chicago Sun-Times suggesting there is anything approaching discord or confusion between the Bulls executive office, coaching staff, and Derrick Rose or any other Bulls player,” Reinsdorf said in the statement. “To the contrary, I can remember no time when the organization has been any more focused, optimistic, and cohesive.”

Rose has a different take.

The guard says the relationship is getting stronger because the lines of communication have recently opened up, but also hints at a not too distant past where friction was brewing.

“It seems like everybody has one goal, from the front office all the way down now,’’ Rose said. “It seems like everyone is finally communicating with each other. That’s all we need. You think about all the championship teams, they say that communication and one goal is usually the recipe. You take away all the other [stuff] and just make it simple.

“This is a new beginning for everybody. We’ve got a new practice facility, a new year where I’m coming back, and we have some great talent. It’s time to turn the page and move in a positive direction.”

The Bulls, on paper, have put together a solid summer.

However, Rose’s health and the tricky internal relationships within the Bulls’ organization will ultimately go a long way in determining if Chicago can truly return to the league’s elite and compete for a championship this season.

The entire NBA landscape was changed dramatically by four-time league MVP LeBron James’ decision to bolt Miami and head back “home” to the Cleveland Cavaliers last month. The HEAT had appeared in the previous four NBA Finals, winning two, and would have been the early favorites to make another Finals appearance in 2015 had James remained in town.

But with James’ departure it opened up an opportunity for the Houston Rockets, among other teams, to make a strong play for Texas native Chris Bosh who also had to decide whether to remain in Miami or pursue a perceived greener pasture in free agency.

The Rockets offered Bosh a maximum level contract and the lure of playing with two younger All-Stars in Dwight Howard and James Harden, which was opposite of what the retooling HEAT could provide at the time.

Ultimately Bosh returned to Miami, accepting a five-year $118 million deal, but the forward readily admits he was close to following James’ exit strategy.

“It was close. I’m not going to lie,” Bosh said on “The Zaslow and Joy Show” on FM 104.3 The Ticket in Miami. “It was close. It was a weird situation because we were waiting so long and I didn’t know what was going on.

“I think you’re always in a situation where it is close even if you don’t leave because teams got very aggressive on me. And I guess as soon as LeBron made up his mind, that’s when everything could fall in line. But I was just waiting, so I didn’t know what was going on.”

Bosh believes the HEAT has a respectable unit and one that he is fully confident will compete at a high level each night.

“I think we have a very good team,” Bosh said. “Looking at the guys we’re bringing in, we have a chance to be very good. I know we don’t have the best player in the world; that’s an obvious thing. But team wise, if we come together we can do a bunch of special things. We’re still going to be competitive. It gives us an opportunity to play with a chip on our shoulder. It has revitalized my attitude towards basketball a little bit. And I’m really excited.”