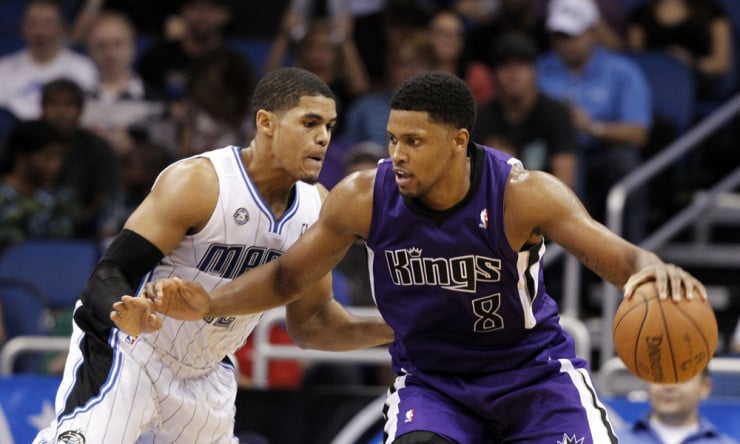 Depending on who you talk to the view of Sacramento’s offseason will vary greatly. The skeptics will point toward the loss of starting point guard Isaiah Thomas, a 20-point per game scorer, in free agency as a sign the franchise will take a step back in 2015. Those opting to evaluate the Kings with a glass is half full view believe the addition of veteran point guards Darren Collison and Ramon Sessions along with rookie lottery pick Nik Stauskas gives the Kings a stronger overall backcourt.

No matter where you stand on the Kings’ direction, mostly everyone agrees the future of forward Rudy Gay is the biggest decision the franchise will face over the next few months.

Gay is set to earn $19 million this season but will be an unrestricted free agent this summer and with close to $100 million in career earnings could opt to chase a title with a team designed to compete immediately. Losing talented assets always stings, but if the Kings lose their second best player for nothing in return, more years in the Western Conference’s basement looms.

The veteran forward has spoken well about Sacramento since arriving, but it’s clear he will evaluate all of his options next summer when situations become more realistic to analyze. Gay confirms contract talks have begun with Kings management, but he doesn’t want them to become a distraction.

“We started [negotiations] before I went to Spain with the USA team, stopped and haven’t picked it up yet,” Gay told Jason Jones of the Sacramento Bee. “It’s something that I really don’t need over my head right now. I’m trying to make this team better and also be better myself. And I didn’t need it over there. That’s something that I think will handle itself.

“I’m not going to get involved until it’s near the end, or both sides feel it needs to happen. Then I’ll make a decision.”

Gay was a late addition to the Team USA roster, which won the Gold medal at the 2014 FIBA World Cup. Gay’s role was different on the international stage and he focused on defense and rebounding during the competition.

It’s becoming increasingly clear the city of Sacramento is starting to win over Gay since his arrival, but potentially hitting the open market is always an unsettling situation for a front office and their fans to endure with a talented asset.

“I’m enjoying California, NoCal,” Gay said. “It’s cool. It’s not as bad as I thought it was. You play in NBA cities and you expect Sacramento to be like L.A. or the Bay, but it’s not; it’s its own little thing. It’s a family city, and that’s what I’m growing to be, more of a family person.”

Gay averaged 20 points, 6 rebounds and 2.9 assists per game in 73 appearances with Toronto and Sacramento last season, but the forward was much more efficient with the Kings.

Warriors’ Thompson laughs off report of his frustration

The trajectory of Golden State Warriors shooting guard Klay Thompson continues to rise. For starters, the Warriors refused to include him in a package for All-Star forward Kevin Love, deeming him an important building block for the franchise. The guard also garnered national attention, winning a gold medal with Team USA at the 2014 FIBA World Cup in Spain this summer. Lastly, Thompson has a strong chance to secure a max (or near max) early contract extension before October 31 deadline for members of the 2011 draft class who are still in their rookie deals.

But according to a report during the summer, Thompson was frustrated his name was being mentioned in trade talks leading to rumors of friction with the Warriors’ front office.

Teammate Stephen Curry put a lot of those talks to bed saying Thompson chuckled at the early report while denying any of the alleged frustrations and hard feelings.

“He jokes about it a lot,” Curry told Rusty Simmons of the San Francisco Chronicle. “I don’t know if he reads a lot, but people guess how he feels or his emotions, and he handles it really well. Somebody said he was pissed off about the trade rumors, and he showed me the link. He started laughing, like, ‘What are they talking about?’

“He knows the game and what could happen every offseason,” Curry said. “He handles it well. I don’t think it affected him with Team USA, and I don’t think it will affect him going into our season.”

If Thompson and the Warriors can’t come to terms before October 31 deadline, Thompson will enter next summer as a restricted free agent – where Golden State would still have the rights to match any offers.

For now, Thompson says he’s not focusing on contract talks.

“I just kind of take it day by day and stay patient,” Thompson said. “I let (agent) Bill (Duffy) and the front office sort it out. I know that if I just keep my mind on hoops and staying healthy, everything else will take care of itself.”

Thompson has increased his scoring average every season since entering the league, resting with a career-high 18.4 points per game in 2014. With an increased workload expected this season, Thompson could easily emerge as a bona fide 20-point per game performer in 2015.