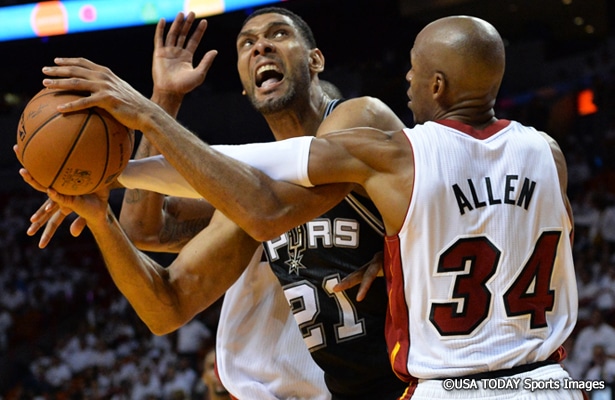 The Miami HEAT have reached the NBA Finals the past four seasons and are attempting the rare three-peat. The problem for Miami is the San Antonio Spurs are seeking revenge for last season’s Finals series.

Entering the Finals, the HEAT were undefeated  during the playoffs games in Miami. But all of that has changed with the Spurs holding a resounding 3-1 series lead winning games three and four on the road by a combined 40 points.

“They smashed us,” James said during his postgame media availability. “Two straight home games [we] got off to awful starts. They came in and were much better than us in these last two games. It’s just that simple.

“We put ourselves in a position where it is about making history.”

The history, James is referring to is the fact no team in NBA Finals history has ever come back to win a series after being down 3-1. James points out that the Spurs are a tough opponent because of the variety of ways they can beat you on both ends of the floor.

“They put you in positions that no other team in this league does,” James said. “It’s tough because you have to cover the ball first, but also those guys on the weak side can do multiple things. They can shoot the ball from outside, they can also penetrate. So our defense is geared toward running guys off the three-point line, but at the same time, those guys are getting full steam ahead and getting to the rim, too.”

All-Star forward Chris Bosh shared the same admiration of the Spurs’ ability to get what they want, when they want it

“They’re just one of those teams — if you make mistakes, especially early, they’re going to capitalize very quickly,” Bosh said. “They’re doing a very good job of starting fast. Not only starting fast, but they’re hitting their shots and getting to the basket, getting to the free throw line. They’re pretty much getting everything they want.”

Regardless of what history tells us in these scenarios, HEAT head coach Erik Spoelstra remains confident the HEAT can still pull out victories if they’re playing their brand of basketball. The veteran coach also put down reports his team is suffering from fatigue – mental or physical.

“It’s not fatigue,” Spoelstra said. “We just have to figure it out. We have 48 hours, and I have to do a better job for my team. We’ve made adjustments, but they’ve still been able to stay in a flow. “When we’re right, we can beat anybody, anywhere.”

The Spurs were less than three seconds away from defeating Miami in game six to win the title during last year’s Finals before collapsing and losing in overtime. San Antonio then lost game seven.

“They’re the two-time champs, they’re a great team, and there is still one more game,” Tony Parker said. “We have to win one more game.”

Rod Higgins out as president of basketball operations in Charlotte

The Charlotte Hornets are currently riding a strong wave of positive momentum. The team reversed its fortune this season, climbing out of the league’s basement and recording the second playoff appearance in franchise history. The Hornets won a combined 28 games in 2012 and 2013, but responded with 43 wins this season largely on the strength of last summer’s free agent signee Al Jefferson.

But the team isn’t finished sending shockwaves around the league.

Heading into the offseason Hornets owner Michael Jordan has publicly vowed to be proactive in bolstering the team’s roster moving forward. The franchise has just $41.1 million in guaranteed salaries on the books for next season with up to $17.7 million in potential cap room available. This gives the Hornets more than enough flexibility to be active on the draft, free agency and trade fronts.

But despite the favorable turn of events, president of basketball operations Rod Higgins stepped down from his executive role and left the organization.

“I would like to thank Rod for his seven years of dedication to this organization,” Jordan said in the Hornets’ media release. “Rod has been a consummate professional throughout his time with the team. Thanks to his hard work and commitment, we have an improved roster and we are poised for success in the future. Rod was of great help to me as I navigated my first four years as majority owner of this franchise. I wish him all the best.”`

General manager Rich Cho will remain in his executive role with the franchise, but will now  assume responsibility for the club’s basketball operations unit.