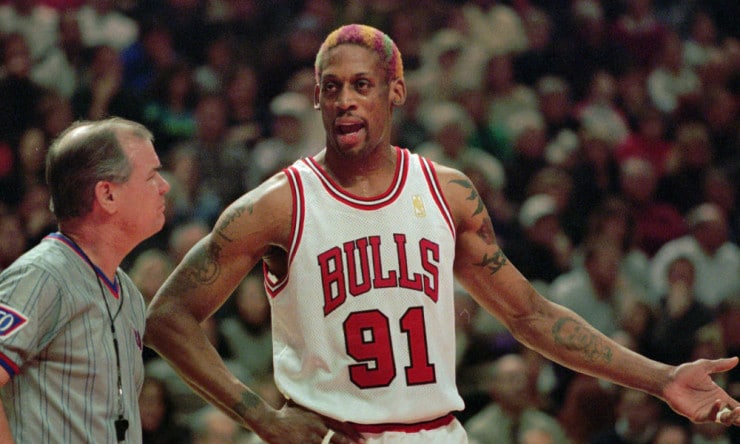 Perhaps you’ve seen the viral video of the Kansas Class 1A state basketball semifinals, where a kid from Centralia High School shoves a high-flying player from Hanover named Thomas Atkins into the next zip code on the tail end of a fast break. If you’ve seen this video, you’ve almost certainly also seen the backlash that clip has received. Many experienced and knowledgeable basketball writers and personalities called that the dirtiest play they had ever seen, but the game of basketball hasn’t gone without its dirty plays over the year. Don’t forget, Grayson Allen and Zaza Pachulia both exist.

But what are the dirtiest plays in NBA history? The following are six of the most dastardly, despicable examples of brutality the league has ever seen:

In the 2013 NBA Playoffs, the Oklahoma City Thunder were fighting their way through Game 2 of what looked like it would be a hard-fought series, when Russell Westbrook slowed up at halfcourt to call a timeout. There wasn’t any question what he was doing, but Patrick Beverley went extra hard at a moment when most other players wouldn’t have, swiping at the ball but throwing his body weight into Westbrook’s knees. Beverley never did apologize for ending Westbrook’s season, and in fact Beverley did the exact same thing a year later. Westbrook, predictably, wasn’t happy about it.

After the original Dream Team rosters had been announced, Isiah Thomas allegedly was not happy that he had been left off the roster. Why wouldn’t he have been upset? Arguably the greatest scoring point guard in the game at that point, it must have smarted to have lost that spot to John Stockton. All of that bad blood apparently had something to do with Karl Malone clobbering Thomas so hard during a 1991 game between the Utah Jazz and Detroit Pistons that Thomas required 40 stitches to close the wound over his eye. Malone got more of his elbow in Thomas’ face than hand on the ball, and as a result was fined $10,000 for the brutal knockout.

In the 1984 NBA Finals between the L.A. Lakers and Boston Celtics, Lakers forward Kurt Rambis broke away for a fast break, which was abruptly halted by the wiry forearms of future Hall-of-Famer Kevin McHale, who just wrapped his arm around Rambis’ neck and slammed him to the floor. The Lakers forward did not particularly appreciate this, so he popped up right away, fully intending to fight the entire Celtics bench. James Worthy held him back, but years later, Worthy said he regretted that. A play that dirty almost deserved the fight that nearly followed it.

After the fact, Smith claimed that he wasn’t trying to hurt Blake Griffin on a fast break, but the hit itself looked better suited for hockey than basketball. Griffin looked ready to do what he does on those types of breaks when Smith threw his shoulder into Griffin, making zero attempt to go after the ball in any faculty. Smith was immediately ejected and awarded a Flagrant 2 foul call, which resulted in his having been suspended two games, both of which he deserved.

Shaq is a big guy, and Rodney Stuckey isn’t. So when O’Neal collided with Stuckey in a 2008 Phoenix Suns game against the Detroit Pistons, it wasn’t a big surprise that O’Neal’s body mass got the better of the exchange. Shaq sort of went for the ball, but mostly just ripped Stuckey to the ground. After a few moments of the guard rolling around on the ground in pain, O’Neal was ejected from the game. Maybe it was dirty, or maybe Shaq just forgot how strong he really was. Apparently, even Superman can be the villain sometimes.

In the 1991 NBA Playoffs, as the Chicago Bulls finally inched their way past the rival Detroit Pistons, Scottie Pippen found himself in line for a dunk that Detroit’s Dennis Rodman was not keen on letting him have. The foul was a hard one, but what made it dirty was Rodman’s shove after the fact, sending Pippen into the first row of fans. The Bad Boy Pistons had a lot of dirty plays in their time—that was sort of their thing, actually—but this one was maybe the dirtiest of them all.

Frankly, none of these are as dirty as the play in that Kansas High School game, which helps explain the uproar. Nobody likes a dirty place in basketball, no matter how severe, but these moments represent the nastiest the league has seen in the last few decades.