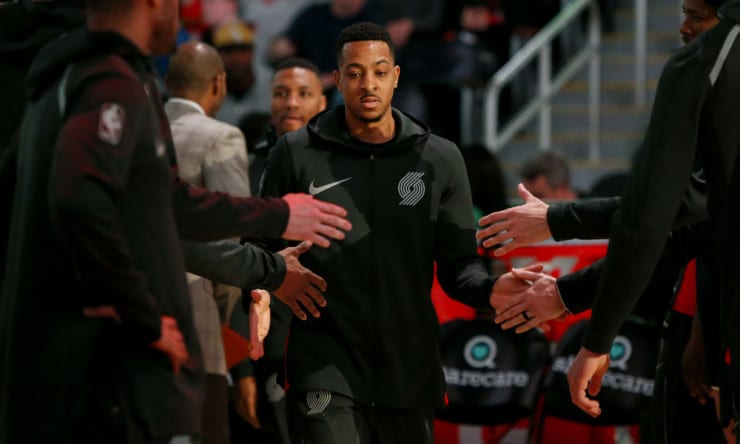 While the L.A. Clippers have surged into the Western Conference playoff picture on the crest of a six-game win streak, the Trail Blazers, Nuggets and Pelicans are stumbling toward the All-Star break with records around .500 over their last 10 games.

All four teams are within a game of each other and hovering around the playoff cut line. For teams that are treading water, the second half of the season will be a struggle for consistency in a brutal playoff race that promises to leave a good team on the outside looking in.

Although Richard Jefferson is winding down a storied career and barely playing for the Nuggets, he often takes the role of elder statesman in media scrums. After the Nuggets became the latest victim of the red-hot Clippers Wednesday, Jefferson said they should not be underestimated.

“They’ve been a playoff team for many, many years,” said Jefferson. “They’ve dealt with some injuries but, for the most part, I think they’re going to be in the hunt for the playoffs just like we are.”

Jefferson was also asked about the Nuggets’ late-game execution and pointed to the team’s overall youth with major addition Paul Millsap missing extended time due to injury.

Meanwhile, the Pelicans experienced its own setback Wednesday in a loss to an Atlanta Hawks team that’s tied for the second-worst record in the league. For now, the Pelicans hold the seventh seed. It will be up to the continuing evolution of the Anthony Davis-DeMarcus Cousins pairing to keep New Orleans trending in the right direction.

“For us, we’re two guys who can shoot the ball, handle it, pass,” said Davis after the loss in Atlanta. “We’ve got a lot of guys around us who are capable of making plays. I think we compliment each other. There’s still some stuff we still want to get better at as a unit.”

“Cuz is always spacing the floor,” said Davis. “One guy’s inside, the other one’s outside. We set screens for each other, throw lobs for each other. So it’s tough for bigs to try to play that. When we set a pin-down for myself or DeMarcus, most four or fives are not used to that.”

Davis came into the game with 30 or more points in three straight games and seven of the previous 10—he’s been on a massive roll. However, that streak came to an end as Davis hit only two of eight shots for eight points. Hawks rookie John Collins scored 18 while dealing with the issues Davis described.

“You’ve got A.D. on the one hand and then you’ve got Boogie on the other hand,” said Collins. “[They’re] some of the best bigs in the league, very skilled guys, obviously a handful to deal with.”

Hawks shooting guard Kent Bazemore led Atlanta with 20 points and hit the final shot in the waning moments to secure the victory. Bazemore is a player the Pelicans could conceivably pursue at the trade deadline to address wing issues.

Meanwhile, the Trail Blazers are dealing with questions of whether a team built around Damian Lillard and C.J. McCollum can become competitive with the West’s upper echelon. Marc Stein of the New York Times went so far as to predict that Portland’s backcourt could be broken up this year.

“No one’s suggesting it’ll happen before the Feb. 8 trade deadline,” Stein wrote. “But Portland’s latest so-so season threatens to be the impetus that finally pushes the longtime Blazers owner Paul Allen in a new direction.”

This is the time of year when NBA teams take stock and have to decide if they are properly constructed or need to look at changes. With the Pelicans, Trail Blazers and Nuggets barely keeping pace in the playoff race, few other teams will be more heavily scrutinized — internally as well as externally — as the trade deadline approaches.