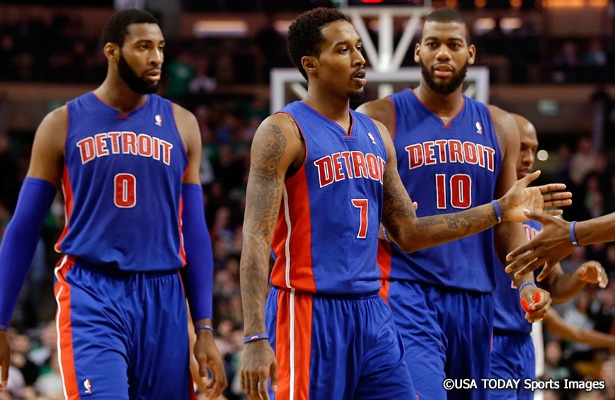 Will Isiah Thomas Be Next Pistons GM?

Isiah Thomas will be back in Auburn Hills at the end of the month to help the Pistons commemorate the 25th anniversary of their first championship team. And we’re hearing that he could be in line to return to the team, a few months after the weekend festivities, for a permanent gig. League sources say that Pistons owner Tom Gores is seriously thinking of making what has been a long-overdue, front-office shakeup after the season, with Thomas recently emerging as a top candidate to take over the role of the team’s top basketball executive from his former backcourt mate, Joe Dumars.

Joe Dumars’ days in Detroit are likely numbered. This rumor has been floating around the league for quite some time, with multiple sources saying that there is “turmoil” within Detroit’s front office. Dumars is unhappy with Gores and Gores is unhappy with Dumars. It hasn’t been a good marriage, and it seems that the Pistons are finally looking to move on and hire a new decision-maker.

The only reason that Dumars has lasted this long is because of his history with the organization. When you lead a franchise to two championships as a player and one more as an executive, you’re going to have a pretty long leash. While Dumars did a solid job assembling the 2004 title team, he’s had plenty of blunders since then. Some examples include giving out lucrative contracts to players like Charlie Villanueva, Ben Gordon and Josh Smith as well as drafting Darko Milicic over Dwyane Wade, Carmelo Anthony and Chris Bosh back in 2003.

It remains to be seen if the Pistons will hire Isiah Thomas as their next general manager once Dumars is gone, but it’s a pretty safe bet that it’ll be someone other than Dumars calling the shots after this season ends. Thomas may be a candidate, but the Pistons will consider all of their options before making a hire.

Adam Silver, while working for the NBA before becoming the league’s commissioner, floated the idea of adding play-in games for the postseason and got some support from owners.

Now as commissioner, Silver remains “fascinated” with the idea of a tournament to determine the final playoff spots.

“By having a seven-game series, you reduce the randomness of the outcome,” Silver said. “I think what’s so exciting about college basketball — and I’m a huge college basketball fan — is the single-elimination tournament, the NCAA tournament. There, statistically, you’re gonna have a lot more upsets. So, I think for us, well, I have mixed views.

“In case of certain teams where star players were injured for a portion of the season or the team didn’t jell until later in the season, that team can become competitive, right? I like that idea.”

via Dan Feldman of TrueHoop

This sounds like a good idea, and it would certainly make things more interesting in the postseason. As Silver said, a big reason why March Madness is so popular is the win-or-go-home element, and this would allow the NBA to do something similar to figure out the playoff picture.

We obviously don’t have any details of how this would work just yet, as Silver just mentioned it briefly while being interviewed by Malcolm Gladwell at the MIT Sloan Sports Analytics Conference.

Silver had a lot of great things to say at the conference, and it appears he isn’t afraid to make some significant changes to the league.

Not only has he talked about adding this playoff tournament, he has also discussed changing the draft lottery system, increasing the age limit, expanding the All-Star break and creating stricter penalties for recreational drug users among others.

Free agent Metta World Peace, according to his brother, has some interest in joining the Pistons, despite being negatively linked with the franchise over the infamous brawl.

As I recently wrote in the NBA AM, World Peace really can’t be picky when it comes to where he’ll be playing next. There aren’t many teams interested in signing the veteran forward, given his recent struggles in New York.

In 29 games with the Knicks, World Peace averaged just 4.8 points, 2.0 rebounds, .6 assists and .8 steals in 13.4 minutes (all of which are career-lows). World Peace has already cleared waivers and is an unrestricted free agent, but teams aren’t lining up to sign him.

World Peace would like to join the Miami HEAT, Oklahoma City Thunder or San Antonio Spurs, but that doesn’t mean the interest is mutual.

World Peace may have to sign a 10-day contract to prove that he can still produce in order to find a new home, just like Kenyon Martin and Chris Andersen among others had to do in recent years.